In recent years, with the rapid evolution of animal cell technology, antibody-based therapeutics enjoyed unprecedented success. MAbs and therapeutic proteins are the most important biologic for treatment of various diseases including cancers, immune disorders and infections. To date, 36 mAbs have been approved by the FDA. The animal cell technologies are still fast growing to standardize and optimize the production processes.

Animal cell cultivation in a lab scale experiment is not always directly transferable to industrial scale. Hence, the gap between lab scale and industry scale in normally bridged by 10 L bioreactor systems. However, the problem that has been realized is to model and analyse based on these 10 L systems are quite labour-intensive and time/cost consuming if a lot of parallel experiments have to be carried out. Therefore, in this project we want to design a micro-bioreactor system which is constituted of a series of ~100 mL bioreactors that can allow a quick screening of clones, medium compositions, feed strategies, product examinations and so on. It is a critical issue to make the micro-bioreactors suitable for animal cell to grow as well as representative for a larger scale bioreactor.

A down-scaled bioreactor will be developed and compared to different culturing systems, namely, shaker cultivation, lab-scale bioreactors and bench-scale bioreactors. The study will be done on Chinese Hamster Ovary (CHO) cells producing a monoclonal antibody. Based on the comparison, improvements will be made to the down-scaled version until results in this system are comparable to larger scale systems. Subsequently, a medium throughput micro-bioreactor system which contains a series of 4 to 8 fold micro-bioreactors will be established and used to develop a fed-batch process. Apart from delivering a fed-batch process, the data will also be used to better understand the process. The obtained fed-batch process will next be tested at larger scale bioreactor and compared to the down-scaled version as a final proof of scalability.

In the meantime, the metabolomics study will be conducted to help us better understand the cell performance, design feed strategies etc. The product titre and quality will be further studied in a medium through-put way by multiplex microarray biosensor based on an imaging surface plasmon resonance (iSPR) platform, which will be developed in a parallel PhD project (Karin Geuijen) running at Synthon B.V.

The project is financed by the EFRO. 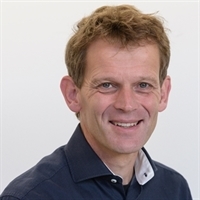