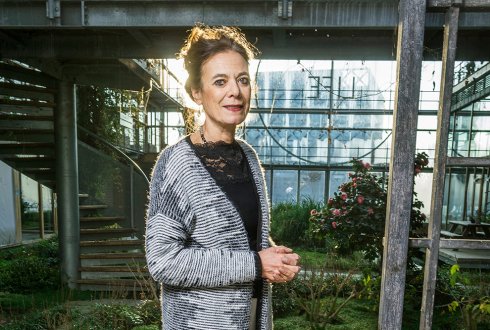 Prof. Louise O. Fresco has been the President of the Wageningen University & Research Executive Board since 1 July 2014.

Louise Fresco is a member of the advisory committee Regio Deal Brainport Eindhoven. She is International Ambassador and Member of the Reference Committee at FOLU - the Food and Land Use Coalition. As of 12 April 2019 she is Independent Non-Executive Director of the Board of Directors of Syngenta, with special attention for scientific innovations for the purpose of healthy, sustainable food production. She is a member of the Trilateral Commission, member of the editorial board of the literary journal De Gids, a member of the Council of Advisors of the American World Food Prize and a member of the Council of Advisors of the Amsterdam Symposium on the History of Food. She is columnist at NRC Handelsblad and chair of the selection board of the Johannes van Dam Prize. She is also Board Member Foundation of the Dutch National Opera & Ballet Fund and Member of the Ambassadors of the National Holocaust Museum (in development).

From 2015 to 2019 she was a member of the 3rd Steering Committee of the High Level Panel of Experts on Food Security and Nutrition (CFS-HLPE).

From 2008 to 2019 Louise Fresco was a member of the Strategic Committee of the Moroccan OCP Group (Office Chérifien des Phosphates).

From 2010 to 2018 Louise Fresco was a member of the board of the Royal Concertgebouw Orchestra.

From 2016 to 2017 she was a member of the Agricultural Markets Task Force of the European Commission.

Until 2014, she was a member of the board of Praemium Erasmium Foundation.

From 2009 to April 2017 Louise Fresco was a non-executive member of the board of Unilever and from 2013 she was also the chair of Unilever's Corporate Responsibility Committee (a paid position).

From November 2014 she was the chair of the FP7 evaluation committee of the European Committee.

From 2012 to July 2014 Fresco was an extraordinary board member of the Dutch Safety Board and of the strategic advisory board of the FAO.

From 2011 to 2014 she was a member of the Advisory Council of The Hague Institute for Global Justice.

In June 2011 she was appointed chair of the Dutch National Platform Rio+20, which prepared the Dutch contribution to the United Nations summit on sustainable development in Rio de Janeiro.

In May 2010 she became a member of the international science team of the InterAcademy Council, which investigated the Intergovernmental Panel on Climate Change (IPCC) at the request of the United Nations.

She was chair of Het Compagnie Fonds of Het Scheepvaartmuseum (The National Maritime Museum) and chair of the professors' chamber within the fund.

In addition, from 2007 to 2014 she was a Crown-appointed member and a member of the Board of the Social and Economic Council of the Netherlands (SER).

From 2007 to 2013 she was a member of the board of the United Nations University in Tokyo.

In addition, she was a member of the Netherlands' Delta Committee from 2007-2008 that focused on the protection of the Dutch coast and hinterland against the consequences of the expected rises in sea level and climate changes.

From 2006 to 2014, Fresco was a member of the Supervisory Board of Rabobank Nederland, one of the world's largest banks in the agricultural sector.

From June 2006 to July 2014 Fresco was a University Professor at the University of Amsterdam, focusing on the foundations of sustainable development in an international perspective. During her scientific career she taught abroad.

In the 2005-2006 academic year she held the Cleveringa chair at Leiden University.

Since 1986 Fresco has held various positions within the Consultative Group on International Agricultural Research (CGIAR), including working as an evaluator at the International Potato Institute and a long period spent as a member of the board of the West Africa Rice Development Association, based in Ivory Coast. She was also a member of the board of the Asian Vegetable Research and Development Center, based in Taiwan.

She was also chair of the Adviesraad voor Onderzoek naar Natuur en Milieu (Advisory Council for Research into Nature and the Environment') and co-founder and chair of the Land Use and Cover Change (LUCC) project of the International Geosphere‐Biosphere Programme (IGBP).

From 1997 to 1999 she was the Director of Research in the Agriculture Department of the Food and Agriculture Organization of the United Nations in Rome. From January 2000 to May 2006 she was the Assistant Director-General of this organisation, responsible for technological issues in the area of agricultural production, and later in the area of food provision.

In the second half of the 1970s Fresco started her fieldwork career with the UN in Papua New Guinea and Zaire/Congo. Since that time she has visited more than sixty countries outside Europe and North America for professional purposes. Fresco obtained her doctorate in Tropical Plant Breeding and Production Systems cum laude in 1986 from Wageningen University. From 1990 to 1997 she was a Professor of Plant Production Systems at Wageningen University, specialising in tropical regions. During this period she took a significant role in the educational reforms focusing on interdisciplinary cooperation, in particular between plant breeding and soil science and the social sciences. She was also involved in extensive fieldwork in Spain, West Africa and Latin America.

Fresco has published an extensive collection of articles in both scientific journals and the popular media. She writes a fortnightly column for the newspaper NRC Handelsblad and is regularly asked to participate in national and international radio and television programmes.

She has published twelve non-scientific books in Dutch, including three novels.

In October 2012 she published the book Hamburgers in Paradise. Food in times of Scarcity and Abundance. The book is published in English by Princeton University Press and in French at Julliard Laffont. In 2014 she published Kruisbestuiving (‘Cross Pollination’) about art, science and life. In 2015 a new edition of De tuin van de sultan van Rome (‘The garden of the Sultan of Rome’) was published.

She is also a member of PEN, the international association of writers which fights for freedom of expression and works on behalf of writers who are oppressed for their views. She is a member of the Vereniging van Letterkundigen (Dutch Writers Guild). Fresco is also an enthusiastic supporter of the arts.

In 2013 she worked on a six-part documentary, Fresco's Paradijs('Fresco's Paradise'), for the Dutch broadcasting station Omroep Human. This documentary was broadcast on the Dutch television station Nederland 2 on a weekly basis starting 13 October 2013.

In March 2017, Professor Louise O. Fresco received an honorary doctorate from the University of Liège, Belgium, for her efforts for sustainable development in an international context, food security and international cooperation.

In February 2017 she received an honorary doctorate from the KU Leuven, Belgium for her important role in the social debate on a sustainable food supply.

In 2016 she was number 22 on the list ‘Top 200 of most influential Dutch people’ published by de Volkskrant (Dutch newspaper).

Because of 'her unremitting efforts to bring the efforts of science to the awareness of the general public,' Louise Fresco was awarded the Comenius Prize in 2014.

On 21 March 2013 the Royal Dutch Society of Engineers (KIVI NIRIA) appointed Professor Louise Fresco as an honorary member. KIVI NIRIA grants honorary memberships to show appreciation to people who have been important in the field of technology in general.

On the occasion of the 95th Foundation Day of Wageningen University on 15 March 2013, Professor Louise Fresco received the Outstanding Alumnus Award.

In 2009 she was invited to be a speaker at the TED Conference in Palm Springs.

In 2008 she received the Groeneveld Award, which is granted annually to a person who or organisation that has made a significant contribution to the debate on nature and landscape, expressing their own critical ideas.

Texts of the lectures: Publications - Lectures