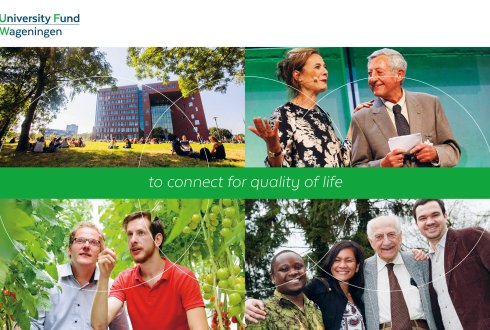 Since 1951, University Fund Wageningen (UFW) contributes to activities that make a difference for the students and for Wageningen University & Research (WUR).

Since 1951, University Fund Wageningen (UFW) contributes to activities that make a difference for the students and for Wageningen University & Research (WUR). UFW connects people, ideas and funds to contribute to the prosperity of the university. That is why the fund invests in the strengthening of the contacts between WUR and her alumni, businesses and relevant social organisations.

UFW contributes to the rewarding and stimulation of excellent education and research in Wageningen, is committed to the scientific and cultural heritage of the university and passes down knowledge through well-attended events. Furthermore, UFW sponsors the development of students and facilitates scholarships for international students.

Do you feel affinity with Wageningen and do you want to contribute to the mission of UFW?
The board of UFW invites companies, alumni, employees, students, professors and other people concerned to financially support one of her funds. Do you have questions or suggestions or do you want to contribute to our mission, as friend or alumnus? We would love to discuss the possibilities.

In 2018, the fundraising emphasis was on the 100x100 campaign. A contribution was requested for four anniversary projects related to 100 years WUR. In total, nearly 600 people donated more than €40,000. One of the projects entailed planting memorial trees, called UniversiTREES. As part of this programme, several trees have been and continue to be planted in the Netherlands and abroad. Another project focused on athletes studying in Wageningen. Thanks to donations, they were able to participate in the Groot Nederlands Studentenkampioenschap (great Dutch student championship) in WUR outfits.

The number of regular donors and the size of the donations increased in 2018. For example, the donations to the Anne van den Ban Fund nearly doubled in 2018, a fantastic result that allows promising students from developing countries to study in Wageningen. Three projects were supported in 2018 using the crowdfunding platform. The projects “WURth-while” and “Bestuiving van Lupine” (Pollination of Lupine) were the most successful. They received 100% and 115% of their funding goals through crowdfunding.

Anne van den Ban Fund
The Anne van den Ban Fund received an amount of €317,000 in donations from private individuals, funds, and foundations in 2018. This UFW (University Fund Wageningen) provides promising students from developing countries with study grants so they can participate in degree programmes at WUR. The power of this fund lies in the special combination of supporting a talented student with their personal story while also contributing to the development of their home country through the knowledge and experience that the student brings back with them. In 2018, the first grant was awarded to a student who participated in an online Master’s programme. The fund works with several other funds on behalf of UFW, which awards specific study grants for certain countries and degree programmes. The Anne van den Ban Fund monitors the academic progress of the student on behalf of these funds and handles the payment of the grant. The grants cover half of the total study costs. The other half is paid by WUR through the remittance of the tuition fee.

Belmonte Arboretum Fund
With the Arboretum Belmonte fund, the UFW supports the former, scientific collection garden in Wageningen. This was desperately needed during the dry summer of 2018. Countless volunteers were at the ready to water the historic collection and a sprinkler system was installed for the rhododendrons. Without these actions, up to a quarter of the collection would have been lost. The door-to-door campaign among local residents in 2017 also yielded new donors in 2018. The fund received a total of over 830 donations in 2018. The 50-year reunion this year contributed to the conservation and management of Wageningen’s loveliest location.

Ground-breaking research
Over the past year, various research projects were made possible thanks to the support of philanthropic partners. The research project “Met stro meer melk en vlees” (turn straw into more milk and meat) was successfully completed in 2018. This pioneering project was made possible due to a unique combination of donors: a private benefactor, a business (CSR policy), and a foundation. The final meeting of the “Africa Agribusiness Academy” (AAA) also took place and was restarted as an investment fund. The start of a special, new project was made possible this year thanks to a generous gift from a philanthropic foundation. This is the “Waterlinzen” (water lentils) project, in which the rapidly growing plant Lemna (duckweed) is considered as a potential, new, protein-rich crop for human consumption. Finally, the foundation was laid for “Fundamental Change”, which consists of 15 ground-breaking, innovative research projects that can contribute to the realisation of the Sustainable Development Goals (SDGs) of the United Nations. During the SDG conference, Towards Zero Hunger: Partnerships for Impact, on 30 and 31 August 2018, the UFW brought various philanthropic partners together in a global cafe setting. The participants, both donors and researchers, attempted to answer the question of how they could collaborate to create impact for the Sustainable Development Goals (SDGs) of the United Nations and to identify the critical success factors in achieving this.

Crowdfunding
In 2018, the target amount for two projects was reached via the crowdfunding platform. The amount achieved for the “Bestuiving van Lupine” (pollination of lupine) project will enable research to be conducted into suitable lupine pollinators. It is a win-win situation for both farmers and bumblebees. By using crowdfunding, the “WURth-while” study fund made it possible for refugee students to purchase required study materials and to pay for travel expenses in order to attend lectures in Wageningen. The crowdfunding for the project “Wormen op Mars” (worms on Mars) will continue into 2019.

Policy and Strategy 2016-2018
In the years to come, WUR will benefit from the further expansion of its service offerings for alumni, thus enabling it to meet the needs of the university as well as of alumni in various phases of their career, in the Netherlands and internationally. A campaign like “Food for Thought” illustrates the growing trend in national and international business towards “philanthropically” motivated private gifts for socially relevant research.

The university will strive to further professionalise its fundraising in the future. It is expected that third party contributions will have an ever-increasing role, especially for projects that are not priorities of government policy or that serve no direct business interest. As anticipated, this is resulting in an increase in the social importance of charitable goals. The collaboration between UFW, WUR and KLV will play an important role in this and has been formalised in the joint cost account, which is expected to result in a two-year extension in 2018.

The most important collective aims are:

b) Network organisation:
Developing and providing a lively network of alumni relations and stakeholders in the Wageningen domain. UFW brings socially relevant topics to the attention of alumni, donors, and other partners and facilitates connections between alumni through activities such as alumni gatherings in the Netherlands and abroad.

c) Support:
Providing support, in the form of time and money, for WUR activities and activities that support the WUR mission. UFW recruits and retains members and raises gifts for things like educational grants, research funding, or named funds. To this end, UFW manages 28 funds and handles the project management of the fundraising for specific and general gifts.

The primary aim of UFW continues to be raising donations from alumni and friends of WUR. Support from international alumni networks is also in line with the needs of international graduates and can contribute to the international name and reputation of WUR. Of course, UFW will continue to cherish and strengthen the long-lasting connection which all interested persons have with the foundation.


Mission and goal for 2016
University Fund Wageningen serves the general interest of the organisation and is a non-profit. Donations to the university fund aim to promote the growth and prosperity of WUR. The fund aims to do this by:

University Fund Wageningen is defining these objectives by:

The following objectives will be the primary focus in 2019:

While the fundraising in 2018 was primarily focused on supporting activities during the anniversary year, 2019 provides us with more time to focus on named funds and long-term projects, which are made possible through loyal and committed donors.

UFW will also concentrate on enabling impactful research at WUR for the Sustainable Development Goals of the United Nations: concrete objectives for 2030 that can only be achieved through collaboration. We will collaborate with governmental bodies, businesses, NGOs, and other research institutions, while also working together more closely and more often with philanthropic partners who want to use their knowledge, influence, and capacity to contribute to solutions for the great issues of the present day. In doing so, the UFW will focus specifically on international partners and engaging in relevant long-term relationships.

Finally, collaboration with WUR can be further reinforced by continuing to professionalise internal processes and systems for relationship management, fundraising, and fund management.

University Fund Wageningen is a registered charity in the Netherlands (ANBI). Gifts to the fund are often tax-deductible, including gifts from abroad. Please check the fiscal laws of your country of residence for details on the tax deductibility of your gift. Donors based in the USA can give in a tax-efficient way through the American friends of Wageningen University at the King Baudouin Foundation United States (KBFUS). For larger gifts, such as a periodic donation or an inheritance with a minimum of €50,000, several options are possible, including the establishment of a Named Fund. Donations to UFW allow for a contribution to, for example, scholarships, research projects or cultural & academic heritage.

Do you need advice on your donation or would you like to know more? Please contact arianne.vanballegooij@wur.nl.

KLV Wageningen Alumni Network
UFW values the bond with her alumni. For that reason, alumni can stay in contact with each other through several means, one of them being KLV, the alumni-association of the university, which has over 8.000 members. Wageningen graduates, students and other professionals with affinity for the WUR are more than welcome to join.

More about the activities