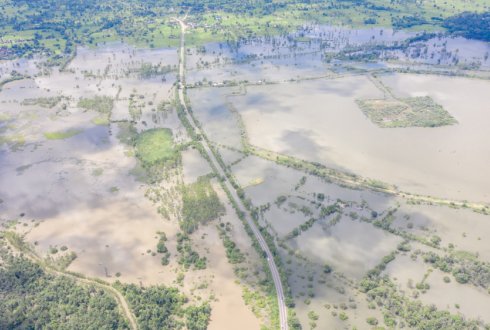 Floods and droughts are climate extremes that account for more than 80% of people affected by natural disasters worldwide. Both catastrophes co-exist in many river basins, for example, the Mun River Basin in Thailand, which is selected as the study area. Approximately 90% of rice cultivation here is rain-fed, and that results in the lowest yields in the country, making many farmers persist in poverty. This study aims to assess floods and droughts and their impacts on agriculture at the basin scale. For flooding, the hydrologic and hydraulic models were developed to produce the first completed flood hazard maps at the Mun River Basin. Droughts in the basin were determined by the proposed drought risk assessment scheme that combines all three key components (hazard, exposure, and vulnerability). Subsequently, the study attempts to tackle both floods and droughts simultaneously and sustainably by using integrated measures and strategies. If the problems caused by flood and drought climate extremes are solved, this will ensure adequate food availability and alleviate poverty in the basin. Furthermore, the study shows that a holistic approach to simultaneously solving both problems is efficient as most water will be utilized to benefit agriculture, the primary sector that feeds a growing population.