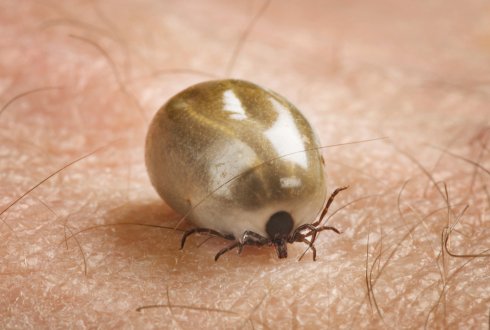 Vector-borne diseases are diseases that are transferred via insects (a vector). This can, for example, occur between animals and humans.

There are approximately 3,000 mosquito species in the world. According to the Dutch species register, 37 of these species can be found in the Netherlands. After mating, female mosquitoes search for blood because they need it to develop their eggs. Only female mosquitoes bite, male mosquitoes live on nectar and plant juices. Each mosquito species has its own preference, some bite animals whilst others prefer humans. They are able to find us by detecting the carbon dioxide that we breathe out, the scent of our sweat and our body heat.

Some mosquitoes carry parasites that cause diseases such as Malaria and Dengue. Malaria is caused by single cell parasites of the genus Plasmodium, which belong to a large group of parasitic one celled animals called the Sporozoa.

Tick bites can cause Lyme’s disease in humans. The percentage of ticks that is a carrier of the bacterium varies from place to place and from one year to another. According to research conducted by Wageningen University & Research, an average 15.1% of all the ticks in the Netherlands carry the Borrelia bacteria that causes Lyme’s disease.

Wageningen University & Research, RIVM and Nature Today are also the driving forces behind Tekenradar (Tick Radar), a website that predicts tick activity in the Netherlands.

Most of the animal diseases that occur in the Netherlands are directly transferred from one animal to another. But other diseases are gaining territory. Diseases that formerly only occurred in the sub-tropics and tropics are moving north and have reached the Netherlands. Diseases such as Rift Valley fever and Bluetongue disease require a specific control strategy. Preventative depopulation does contain the disease, but does not eradicate it. The best way to control these diseases is through prevention.

Highly secured Lab for experiments with viruses transmitted by mosquitoes: