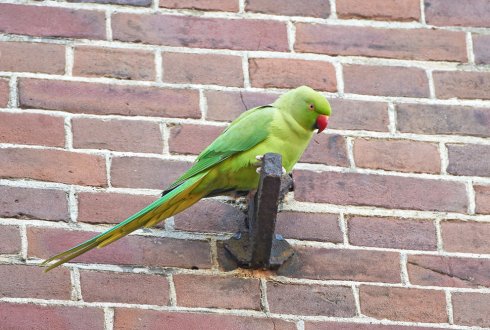 Exotic species, also known as alien or introduced species, are animals, plants, fungi or micro-organisms imported through human activity into an area where they do not originally occur, but where they proceed to thrive. Species which were introduced to the Netherlands before the year 1500, such as the rabbit, the pheasant and the mute swan, do not count and are considered indigenous.

Exotic species are sometimes introduced deliberately. An example is the multicoloured Asian ladybird, released in Europe 20 years ago to combat aphids. Pheasants and fallow deer were once released as hunting game. And every year hundreds of turtles and pond perch are released into Dutch watercourses when their owners have had
enough of them.

But a lot of species get introduced by accident too. Sometimes pets or ornamental animals escape from captivity, as did the Egyptian goose, the Pallas’s squirrel and the Italian crested newt. Marine creatures such as the Chinese mitten crab are brought in with ballast water from ships; the tiger mosquito hitches a ride on tropical plants. And since a canal was dug between the Rhine and Danube 20 years ago, fish species from the Danube watershed, such as the round goby and the money goby, have been able to reach our waters.

Another category of newcomers do not get classed as exotic species: these include species such as the great egret, whose habitat is shifting as a result of climate change. These species fall into the same category as the lynx, the wild cat, the wolf and perhaps now the golden jackal: animals that establish themselves here of their own accord.

Projects on exotic species in the Netherlands