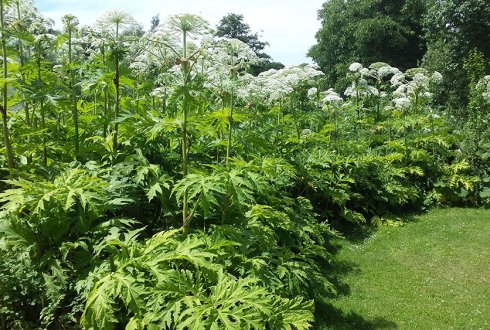 Giant hogweed (Heracleum mantegazzianum) can become an incredible nuisance. This plant displaces native plant varieties and the plant sap contains substances that can lead to serious burns on the skin. Giant hogweed is most often found along rivers and streams, roads and railways and can grow up to between 3 to 5 metres in height. So, how do you deal with this plant and prevent it from spreading and limit the health risks that it poses?

How to recognise giant hogweed

The most striking feature of giant hogweed is its size, as plants can grow up to between 3 and 5 metres high. The stems are 5-10 cm in diameter and have purple spots. The leaves can grow up to 3 metres long with deep feather-shaped incisions.
Click on the photograph to enlarge it

How does giant hogweed differ from common hogweed?

Common hogweed (Heracleum sphondylium) occurs naturally in Europe. It is a perennial plant that grows to a height of approximately 90-150 cm and is commonly found in rugged grasslands, road verges, thickets, wilderness areas and along dikes. The plant has bristly hairs with pinnate leaves of five to sometimes nine leaf segments, often with a lobed leaf edge. The common hogweed blooms from June to October with white flowers in umbels. Touching this plant can cause skin irritation in people with sensitive skin, but the effects are much less pronounced than cases of contact with the giant hogweed.

For small plots and gardens:

You can leave the giant hogweed standing in your garden, but you must prevent the formation of seeds that will allow the plants to disperse. Removing the plants is the most effective measure to prevent it growing elsewhere and to prevent damage to people's health.

Always wear protective clothing that covers the entire body, such as boots, gloves and a rain suit, when handling the plant. Your eyes also need to be properly protected.

A more detailed explanation of ‘How to get rid of giant hogweed.’

A more detailed explanation of ‘How to get rid of giant hogweed.’

Where does giant hogweed come from?

The giant hogweed (Heracleum mantegazzianum) is not native to the Netherlands but was brought to Europe as a garden plant in the nineteenth century. This species originates from the mountainous Caucuses region of southwest Asia and was brought to the Netherlands over 150 years ago as an ornamental plant. However, the giant hogweed quickly started becoming invasive on a large scale. Nowadays it is a common species, especially in urban areas, at the inland edges of dunes and in clay areas.

What are the risks?

The giant hogweed can cause various negative effects and nuisances.

Risks for the natural environment

Native plant species are displaced, as the giant hogweed grows rapidly in early spring and has densely closed foliage. Banks and taluses become more unstable due to the displacement of undergrowth, especially in the winter period when the soil is exposed.

When the plant is damaged, it secretes harmful substances (furanocoumarin derivatives) that cause blisters on the skin when exposed to sunlight. The affected skin can remain sensitive to sunlight (ultraviolet light) for an extended period of time. People who are exposed to giant hogweed as part of their jobs are most at risk. There have also been cases where pets have experienced similar symptoms after having been in contact with giant hogweed.

Always wear protective clothing that covers the entire body, such as boots, gloves and a rain suit, when handling the plant. Your eyes also need to be properly protected.

How does giant hogweed spread?

The giant hogweed starts to grow in early spring around the end of March or beginning of April and only produces leaves and a taproot in the first year.

The plant can already start flowering in the second year, but this usually only takes place in the third to fifth year. The plant flowers from June to August and has small white flowers in large umbels with a diameter of up to approximately 80 cm.

Each plant has several umbels and produces an average of 20,000 seeds, but some plants can even produce up to 100,000 seeds. The seeds end up in the top layer of the soil at a relatively short distance from the mother plant (<10m) and can remain germinative for up to seven years. The seeds are mainly distributed over longer distances via open water or through human activity (mowing, ground transport, etc.).

Can you prevent giant hogweed from spreading?

Prevention is the most cost-effective approach to invasive exotic species. You can prevent the giant hogweed from forming seeds by mowing regularly from the beginning of May.

Also prevent activities at or near places where the giant hogweed is located which may cause you to unintentionally contribute to the further spread of the species.

It is important to work carefully, so that no seeds are spread by machines, clothing or ground transport which could lead to new hotspots. Also check and clean clothing and machines after carrying out the work.

How can you control giant hogweed?

The earlier you start controlling the giant hogweed, the higher your chance of success as the plant can still be eradicated at an early stage of growth.

Cutting at the roots

Mowing and removal is a suitable method to control giant hogweed growing over larger areas. For this method to be effective, it is important to start early in the season (early May) and to mow at least five times a season. This prevents the plants from forming new shoots at an accelerated pace and from blossoming (stress-induced flowering). This method needs to be repeated for several years until the seed stock in the soil is exhausted.

Intensive grazing is a commonly used and highly effective method for controlling large areas of growth. Sheep and goats are particularly suitable for this purpose, but cattle and pigs can also be used. In general, the animals first have to get used to the plant because of the substances that it releases. This method also requires repetition over several years until the seed stock in the soil is exhausted.

Giant hogweed can be effectively controlled with a glyphosate-based herbicide. This herbicide is most effective if applied in spring (mid-May) when the leaves have developed and the plants are still easily accessible. However, it is necessary to keep checking during the season for regrowth and the germination of new plants. In the Netherlands there is a ban on the professional use of non-agricultural pesticides in all paved and unpaved areas. A number of specific plants and insects may still be controlled with a pesticide if this is necessary for the protection of the health of humans, animals or the environment. This also applies to species included on the list of invasive alien species considered to be of Union concern. The giant hogweed falls into this category.

Support - Are you a site manager and do you need advice related to giant hogweed?

The Wageningen University & Research advisory team can advise and support you in dealing with invasive exotic species such as the giant hogweed. These consultants have extensive experience and are experts in the field of weed control. They are also well-informed of the latest information about the current situation.

Always wear protective clothing that covers the entire body, such as boots, gloves and a rain suit, when handling the plant. Your eyes also need to be properly protected. Since the sap of the giant hogweed contains substances that cause chemical burns to the skin when exposed to sunlight, it is best to carry out the work on a cloudy day. When mowing large fields of giant hogweed, it is advisable to wear a mouth mask or to take regular breaks.

What should you do if you come into contact with the sap of the giant hogweed?

Invasive alien species considered to be of Union concern

Giant hogweed is included in the list of invasive alien species considered to be of Union concern ('the Union list’) pursuant to Regulation (EU) 1143/2014. This means that there is a European ban on the possession, trade, breeding, transport and import of the species. In addition, Member States have a duty to trace and remove populations of giant hogweed present in nature and, if this does not succeed, to manage the population in such a way that distribution and damage are prevented as much as possible.

Invasive plants are a major nuisance because they reproduce extremely quickly and are difficult to control. What can you do about it? Find out more about solutions and regulations.