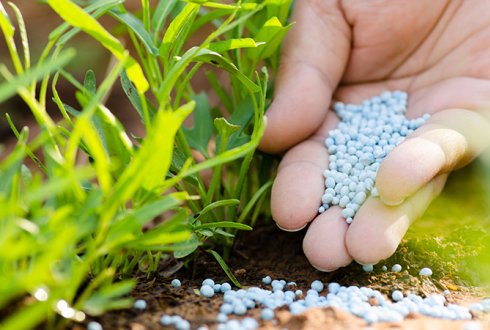 Plants, animals including humans cannot do without phosphate. For our food production, phosphorus is indispensable in the feed for the animals and in the fertilization of crops. The world stock is finite, so we have to deal with it economically. Moreover, it is bad for the environment if too much unused phosphate ends up in the soil. That is why Wageningen University & Research is conducting research into the efficient use of phosphate and the effects on the environment.

In nature phosphorous is most abundant in phosphate compounds. These are compounds of the mineral phosphorous (P) with oxygen (O).

Why is phosphorous so important?

Phosphorous occurs in the cell material of all living beings. It is, among other things, necessary for the energy transfer between cells, growth, development and reproduction. Thus phosphorous is one of the most important elements for all life on earth.

The stock is finite

Phosphate is extracted from phosphate ores. The easily recoverable ore stock is finite. Moreover, phosphate is not replaceable by another resource. That is why we have to deal with it efficiently. 80 percent of the extracted phosphate ends up as artificial fertilizer on land. Since the 1980s, the Netherlands and Europe have made great progress in reducing the use of artificial fertilizer.

Negative effect of accumulation in the soil

The natural phosphate levels of the various soil types are low. Additional fertilization is then necessary. However, too much accumulation of phosphate in the soil, for example on agricultural land, leads to phosphate leaching and runoff to the surface water. This is bad for water quality (e.g. algae growth) and biodiversity. One more reason to do research into closing the phosphate cycle, whereby no unused phosphate is lost from the cycle.

Phosphate is necessary for food production

Since the 1960s, global use of phosphate fertiliser has quadrupled leading to a marked rise in crop production in many situations. This was a necessary increase, however, to meet the growing demand for food due to the rate of the population growth. Because the demand for dairy and animal products also increased, more and more phosphates were supplied in the form of animal feed, particularly in regions with intensive livestock farming. In the Netherlands and many other Western European regions with substantial supplies of livestock, the importation of phosphorus outweighs its exportation. As a result, more and more phosphate is accumulating in the agricultural land, which can have adverse consequences for the environment. The use of phosphate strongly varies around the world: Europe, North America and China are intensive users of phosphate. Other parts of the world, however, use little to no fertiliser. In these places, the land will yield less and the soil can become depleted, because the crops extract nutrients from the soil without it being replenished.

Phosphate is extracted from ore that is stored in mines. Morocco holds more than 70% of the world’s phosphate reserves. According to estimates, there are still roughly 67,000 million tons of phosphorus available that can be easily extracted. That extraction amounts to 220 million tons of phosphorus every year. Put succinctly, the current phosphate reserves in the mines will last approximately for another 300 years. This is a relatively short period of time. Therefore, it is extremely urgent that we extract phosphate and begin recycling it.

When too much phosphate accumulates in agricultural land, it can leach into the surface water. This run off makes the water more nutrient-rich (eutrophic), which in turn affects the flora and fauna of the water. Eutrophication can stimulate the growth of algae and duckweed, which blocks sunlight from reaching the bottom of water bodies. Without sufficient sunlight, aquatic plants die and begin to rot in this soil. The process of plant decay removes oxygen from the water, which can result in the death of fish. In addition, some algae are poisonous, such as blue algae.

Given that phosphate reserves are finite and that the leaching of phosphate into the environment degrades the quality of surface water, better efforts must be made to close the phosphorous cycle. This can be accomplished by reducing the supply of phosphorus, for example, by using less phosphate fertiliser in arable farming and horticulture on soils with a high phosphate level and by using low-phosphate animal feed in livestock farming. Phosphate losses into the environment can be minimised by applying the right manure at the right time and the right place. Furthermore, phosphates from animal manure must be extracted and reused because, in the Netherlands, that is where the phosphate surplus primarily accumulates. Improving the resource use efficiency of phosphate will create a more sustainable agriculture.

To prevent nitrate leaching from agricultural soil, the European Union drafted the Nitrates Directive. The directive states that the eutrophication of surface water by phosphates must be prevented. To comply with the EU's Nitrates Directive, the fifth Dutch action programme for its implementation is now in force. Furthermore, since the 2015 abolition of the milk quota, supplementary measures have been implemented. These measures should safeguard land-based farming for dairy farms that are growing and prevent the Netherlands from continuing to exceed the phosphate ceiling: phosphate rights and land-based farming. The system of phosphate rights went into force on 1 January 2018.

Do you have a question about phosphate? Ask our experts:

This dossier contains a selection of the most significant information, results and developments on fertiliser.