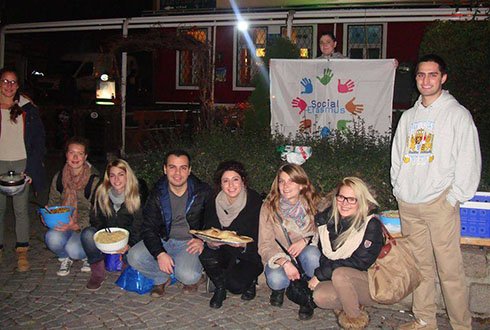 Recently I helped to cook a dinner for the homeless people of Brno. This activity was organized by ISN. Together with a Spanish girl, I made a rice-salad. Also other groups would cook a dish and we had a budget of approximately 5 euros.

First we had to do some shopping. We bought three kilo of rice, some frozen vegetables, fresh parsley and peppers in cans. We started to cook but we almost had a shortage of pots. Because we didn't have big cooking pots, we needed three pots to cook the rice in. It was almost growing over the edge... In another bowl we put the defrosted vegetables. After we mixed salt, chilli, and parsley with the rice and were ready to go. Than there occurred another problem: how to transport all those pots and one bowl?! Fortunately we found a large plastic bag and other Erasmus students were willing full to help us with carrying the food.

We took the tram and got off in the city centre. We walked to a small square and saw a lot of homeless people gathering. The homeless thought that they would receive warm blankets for the wintertime but didn't know they would also get food in addition. So it was a surprise for them. First they got some bread and meanwhile we installed the pots on a bench. People came already to us, asking for food but we had to decline this because we had to wait for another group of another university.

Finally we could start to distribute the food and I really saw the people were hungry. They all came for a second round, looking for leftovers. There were a variety of people: young and old, man and woman. A little girl, at the age of around 8, was also there and I was surprised to see such a young person in this setting. Most homeless people were man. After the food was consumed, the people gathered and walked together to the next point of food distribution, somewhere near the railway station. It was a special experience that made me feel happy and sad at the same time. Happy because we had given them some food and sad because their situation is very bad.