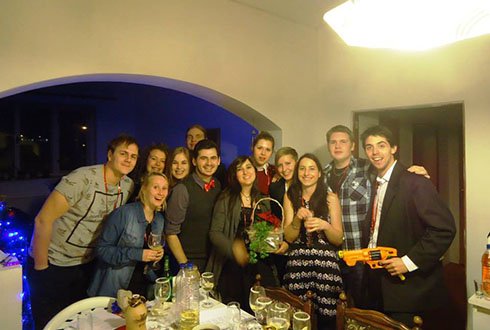 Because almost everybody of my Erasmus-friends goes home during the Christmas-holidays, we planned to organize a Pre-Christmas dinner together. Our Czech friend, Klara, said it could be held in her parents' house. She also wanted to prepare everything and she wanted to prepare everything herself. Although we offered our help a thousand times, she wanted to do it alone. She wanted to make us a typical Czech Christmas-dinner and everybody was looking forward to this. A couple of days before we had our dinner together, she posted on facebook a picture with envelopes. On every envelope she had written one of our names, this was our invitation. She also posted a picture with the menu of the dinner. She really put effort in it because the menu was nicely decorated. We all had to buy a Christmas-present for somebody. I bought Klara a kind of bag which you can put in the microwave for a couple of minutes and after it'll stay warm for a long time and you can put it in your bad for instance, to keep you warm.

So when the day came when we had our dinner, we walked together from the dorms where we all live, to Klaras' house. Fortunately she lives nearby. Everybody was dressed up neatly, like you should during a proper Christmas-dinner. When we entered the house, we were welcomed by Christmas music and a good smell of food. Stefan and me were helping Klara in the kitchen while the others were decorating the Christmastree. When we were ready to have dinner we gathered at the nicely decorated table and sat down. The first dish was soup. It was a kind of vegetable soup with carrots, potato, lentils and meat. Klara was so sweet to take into consideration that some among us, including me, don't eat meat or are vegan so she made the soup for us, leaving out the meat. The soup was good and almost everybody took a second plate. After the first course we had the main dish: potato-salad with fish or a kind of snitzel. For the vegetarians she made tofu with a crust and for Karolina - vegan - without crust. She also made Karolina a different salad with lentils, beans and grains, very tasty. She also prepared her some baked mushrooms and onions.

The table was very nicely decorated with a sheet and candles. Every wineglass had a layer of sugar around it which looked very chique. After the main dish everybody was totally stuffed. The desert were some fruits but nobody had room for those at that moment. Klara also baked cookies and made chocolate bonbons and they were all disappeared at the end of the evening... After we had our dinner we unwrapped the packages and I got a funny turtle-bag. Klara gave us each a Christmas-card. She also gave us a walnut shell with a small, fixed candle. We lighted them and put them in the bathtub which was filled with water. Klara told us it was a tradition in Czech republic and when the walnut shells of persons collide after a while, means that next Christmas they'll see each other again. That was a nice thought. At the end almost all shells sticked together, except the one of Karolina which was staying alone at the other end of the bath. When we had looked at the drifting walnuts for a while put on our jackets and went outside to release wishing balloons into the air. All balloons went perfectly into the air without any problem and it was a beautiful sight. We also sang a song which Roger found suitable for this moment. None of us knew the song so it was a bit difficult to sing but it was a nice idea.