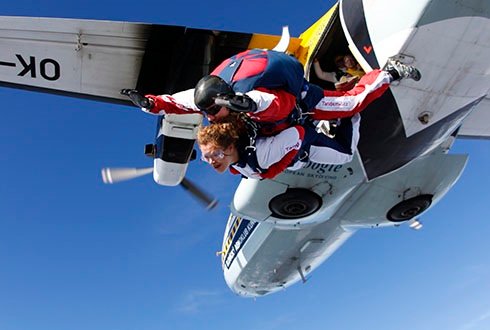 One of the most special experiences since now: skydiving! A Finnish friend, Janne, told me that two other Finnish boys, who are doing their Erasmus here as well, went skydiving. He showed me the movie where you could see that one of the boys was flying through the air. It made him feel jealous and he wanted to try it himself as well. After having seen the movie, I wanted to jump too. Together with a group of Erasmus students we made a reservation for a tandem jump. We had to travel for two hours to get there and we bought the tickets in advance. First, we bought the wrong tickets but fortunately we discovered it on time and were able to buy the right tickets.

So finally it was weekend and we all were excited and happy, although at the same time stressed. When we got off the train we had to find the way to the airport. We already saw some planes going up into the air and dropping parachutists but it was unclear how to reach the right place. Luckily we found some hints and reached the airport just on time. A French guy, Kevin, was really terrified but he insisted to jump because he wanted to be cool too. He was the first one to jump and he got a nice suit on. Everything was explained to him and he gave his friends a call, in case it would be the last one. He asked the instructor if everything would be fine. The instructor laughed and calmed him down. He told him that he jumped already for 4220 times and nothing went wrong during all those jumps. When Kevin went up into the air, we were all concerned about in what state he would come down because he was really terrified. So when Kevin stood on the ground again he had a pale face, felt nauseous and said to us that he would never do it again. Despite those facts, he was happy to have jumped.

After Kevin, a Bulgarian boy jumped and after him, it was my turn. I decided that I wanted to make a movie of it, like the Finnish guy did, so there was another person joining us to make a movie and pictures of my jump. The camera was installed on his helmet and via a tube in his mouth, which was connected with the camera, he could make pictures. When we were in the air I realised I couldn't go back and the real adventure began: First you fly for 20 minutes in order to reach a height of 4 kilometres. During the flight the instructor shows you how high you are. You put your glasses on and walk to the exit together with the instructor. This is a bit inconvenient because you're fixed in a harness with the instructor. When you reach the exit you can see the landscape below you and clouds passing by. The instructor tells you to get in the banana position. In this position you have to lean with your head against the shoulder of the instructor and put your legs bended in between his legs. He counts down and you'll fall into nothing...

Air is blowing into your face, you feel your skin flapping and your mouth gets dry. After you've fallen 3 kilometres down, the instructor opens the parachute and suddenly you're hanging peaceful in the air. I could see very far and the instructor was telling me about the surroundings. I even was allowed to steer the parachute myself. After 5 minutes of easily flying through the air we landed on the ground. On our way home I was still thinking about the jump and when I would get another opportunity to jump again, I'll do it because it was an awesome experience!