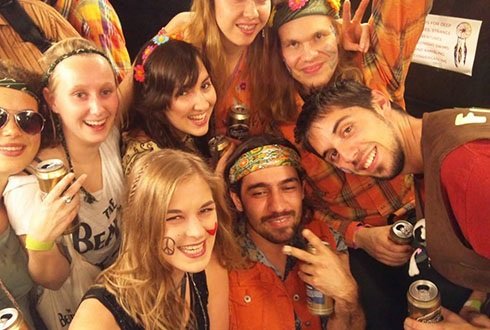 One of the most interesting and brilliant parties I've experienced in Brno is the tram party. Before the party started, we gathered in one of our rooms to make a toast and to prepare ourselves for the party. The theme of the party was 'hippie' and everybody had to be dressed up. After we had drawn peace signs, peace -pigeons, flowers and hearts on our cheeks, we were ready to go!

We drank together one shot of Salmiakki. This spirit is from Finland and a Finnish guy took it with him. It tasted like 'dropshot' which we know in the Netherlands, but this Salmiakki is stronger. Most of the other Erasmus people liked it as well, one person found it really disgusting. On our way to the tram we finished the bottle of Salmiakki....

When we arrived at the party tram there were a lot of people. The aim of the party was to drive with the tram for tree hours through Brno. In the tram music was playing and drinks were distributed. When you entered the tram you got one can of beer for free. When the tram started to drive, the party started. Everybody was happy and in the good mood of love and peace. All students did very well on their costumes, a lot of them wore sunglasses and of course very colourful clothes. Most of the students shopped their outfit at the second-hand stores. Those kinds of stores are very much present in Brno city, they're very popular and not expensive at all. In a lot of stores, the price of a particular piece of clothing is one or one-and-a-half euro. You can buy everything in the stores; jackets, trousers, blouses, scarf, pull-overs etc. I also bought a blouse, with broad sleeves and one scarf which I put around my head. During the tram-trip it was dark, so we weren't able to look out of the window and to see where in Brno we were driving. The music was not very loud so we could easily talk with each other. At two points of our trip the tram stopped to give students the opportunity to pee.

In total there were 3 trams; every university had one for its own, but you were allowed to get on the trams of other universities. It was a nice experience to have a party in the tram but keeping your balance remained a challenge. After three hours of driving through Brno we stopped at the main station and went on to the after-party. The after-party was a good party as well but the tram party was the best, definitely. It was a great evening that I will remember for a long time.