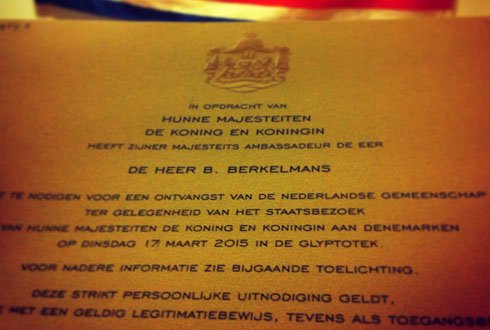 It was the week before I supposed to leave the Netherlands and start my adventure in Denmark; studying at Denmarks Technical University in Lynbgy, close north of Copenhagen. I got an email from the international office, in which I got an invitation for joining the Dutch embassy in receiving the visit of our Royal Highness and his wife. Since our king has just been inaugurated since April 2013, it is a really exciting opportunity to meet him in person. Especially because of his former royal role as the ‘Water ambassador’ of the Netherlands. Which absolutely matches my study area in terms of agriculture, drinking water and water safety.

Moreover 3 weeks later I got another email that followed up in a phonecall from the Embassy’s secretary. She personally invited me and Jill Soedarso – BSc Environmental Science student, also from the WU – to speak up in person within a closed setting to the King and his princess. We will be representing the ‘education’ sector of Denmark, together with other Dutch community members that live here.

Thus on the 17th of March we are invited to the Ny Carlsberg Glyptotek museum, which is in the middle of the citycenter of Copenhagen. Carl Jacobsen, the founder of the famous beer brewery brand ‘Carlsberg’, found this museum in 1882. It has a fantastic amount of sculptures from the French and Danish collection.

Really looking forward to this special occasion, in which I am honored to represent the ‘Dutch students’ in Denmark, although just being here for one semester ;).