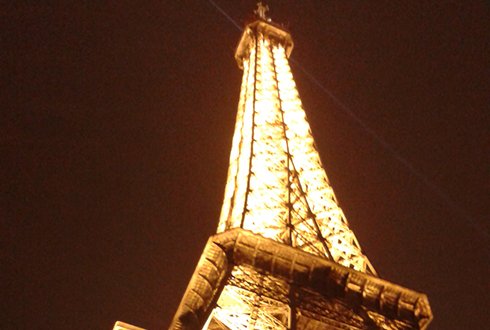 My first week in Paris already ended a few days ago.
The journey to Paris was really easy and fast with the TGV. Three hours after I left Holland I was standing at Gare du Nord with a huge challenge. I had to bring my enormous red suitcase from the railway station to my new apartment not far from the Arc de Triomphe . The subway is fantastic but unfortunately it has many stairways. Luckily the French are really nice and helpful!

The next day I had to take a French language test to determine my French language level. One and a half hours and eighty questions later, I finally knew my French language study group. The next couple of days passed really quick, there were so many things to be organized and arranged: a French bank account, application for rent subsidy,  a metro card, French phone number and of course enjoying the French atmosphere.

Every afternoon I followed four hours of French classes with a small group of other international students (Germany, Korea, Ireland, Canada etc.). During these classes the use of English is strictly forbidden. It’s all very interesting and informative but also really difficult and tiring. Luckily there were also moments for a bit of relaxation. For example, at Thursday night there was a drink straight under the lights of the Eiffel tower for all the international students of Dauphine and, for the real party animals, a party afterwards. On Saturday too, there was a drink under the Eiffel tower and afterwards we continued on a party boat on the Seine with great view! Paris is wonderful and I am curious about the next weeks!