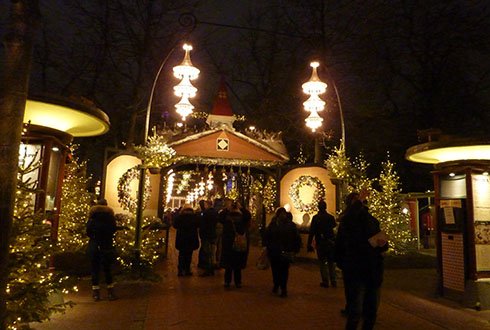 It is a bit late already, but I still wanted to write a blog about the Christmas period in Copenhagen. For Christmas itself I was back home celebrating with my family, but it starts earlier here in the city. Of course, they don’t have Sint-Nicolaas. Thus the decorations and Christmas markets are set up early.

One thing is that every year they have their Christmas Beer. The first serving is on the first Friday of November. That evening every person will be in a bar, and at nine o’clock the beer is served for the first time that year. It is too celebrate the coming of Christmas and many people will wear blue coloured Santa-hats. This particular day is called J-day. And of course, I sat in a bar at that moment. I, somebody who really dislikes beer, must say it is not as bad as normal beer. So praise to the Christmas beer. I was told by somebody that other beers brewed for Christmas had normally al kind of ingredients like cinnamon that made you think of Christmas. Here they also make beers, instead of such ingredients, they make sure they fit the traditional meals served on Christmas. Food such as roast duck, roast potatoes, red cabbage and hot cherry sauces. They also have a rice pudding on Christmas day. In that pudding an almond will be hidden. If you find that almond you will get a present, usually a marzipan pig.

The city will also be full with Christmas markets. Some only for a day, and some for a longer period. It gives a great atmosphere to the city and is a lot of fun to just walk through. They have a lot of goods for sale, and of course Glögg. Which is comparable to Glühwein, but my guess is with a few different spices.

During Christmas time, it is also really awesome to go to Tivoli. It is all decorated with lights and trees, and a lot of extra stands that sell food and goods are present. I went to Tivoli on New Year’s Day. It was still covered with Christmas decorations. They also have firework shows around that time of year in Tivoli. It looked beautiful, with even fireworks shaped like smileys. It is of course a bit more crowded, but definitely worth to go.

On New Year’s Eve I was at Nyhavn. We saw some great fireworks from hotel D’Angleterre. Other than that, people are allowed to shoot their own fireworks on the streets. For me this was a bit much, because it is a busy city and I am often a bit scared of fireworks. The great thing is, you could easily travel with the metro and not be bothered by the fireworks. But it was still awesome to see and of course we drank some champagne.