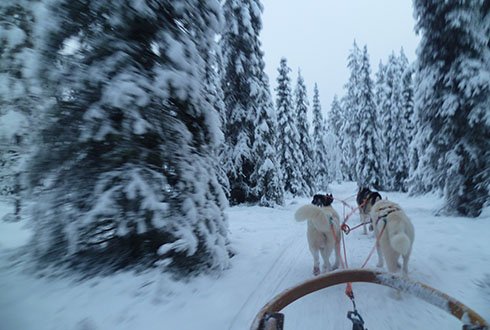 In between al the studying, I have been on a little vacation to Lapland. It was organised by an organisation for international students. A lot of people that I have met here also went. Of course, I met a lot of new people too.

The trip started with a twelve our bus trip. The bus left in Helsinki, thus I had to arrange my own plane ticket to the city. Together with some friends, we left early so we could see the city itself too. We had a nice day with a lot of walking and sightseeing. We have been to a rather special church, which was made out of the surrounding rocks. We have seen other churches as well, a very nice bookshop and our first heap of snow. While at home, everybody was enjoying Sint Nicholas, we were already in Christmas spirits.

On our bus trip to Levi, a city in Lapland, we stopped at a wildlife park and the Santa Claus village. The village was, of course, completely made for tourists which made it less fun. The only great thing about the village was the coordinates of the Arctic Circle.  Too bad for us, they were buried under the snow.

From Levi, we travelled to several locations for activities. I drove on a dogsled, have seen reindeer and I naturally went skiing one day. Driving on a dogsled was the most amazing thing I have done there. The moment we came there, it was incredibly noisy due to all the barking of the dogs. They were ready in front of a sled. You went with two persons on one sled, and halfway the ride you switched as driver. I was the lucky one, my sled partner didn’t want to drive, so I could go the whole way. It was amazing, being pulled by dogs in a snowy landscape with complete silence surrounding you. After the drive, we had a nice warm drink and a sausage in front of a fire.  Of course, I went too pet the puppies and took loads of pictures.

The reindeer were being kept at a farm. They told us a little bit about the culture and how they collect all the reindeer and the beginning of winter. The sled trip with the reindeer wasn’t much after the dogsledding, but we could also feed the young reindeer. They do that to make sure that the reindeer get used to people. The reindeer are half wild animals. In the summer they live outside of the farms and in the winter they stay at the farms.

I also went skiing. Luckily, I came back in one piece. It was my first time on skies and I am horrible at it. Of course, with all that cold weather I enjoyed a very nice sauna and spa as well. It was a very relaxing last day, being in the spa. I did needed that after this amazing, but tiring, week.