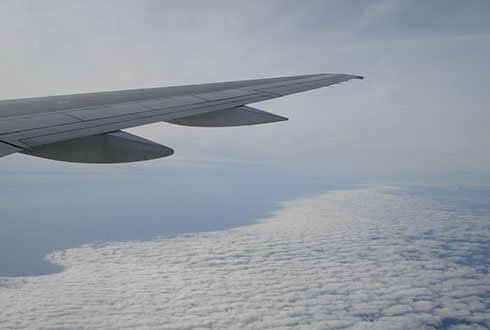 Before arriving at Sint Eustatius, there was a journey of 35 hours awaiting me. Firstly, I had to make a 20 hour stop-over at New York. I had been there once before but it was again pretty amazing and overwhelming. Everything is big, shiny, bright, full of energy and movement. There is a reason people call it ‘the city that never sleeps’. Together with a study mate, who is also going to Sint Eustatius, we arrived at 13.00 in New York and had to catch a flight to Sint Maarten the following day at 9.00. That left us plenty of time for a quick visit.

In the time span of about 7 hours we crossed the entire borough of Manhattan. We went from the World Trade Centre Memorial to Wall street and the Brooklyn bridge and from the ‘hipster’ Meatpackers district with a cycling store where they were watching a rerun of ‘Omloop het Nieuwsblad’ completely with Belgium voice over, to Time square and the ice skating rink at Central park. We enhanced our complete NY experience by having a real American dinner at Eden Stardust diner. This is a place where singing waiters and waitresses try to find their way to the top. But at about 10 pm we were quite tired and since we had to wait until 9 the following day, we decided to go to the movies.

It turns out they are a really great place to sleep which made us stay there until 2 in the morning. When finally collecting enough energy to go to the airport, we discovered that even New York has a slow pace once in a while. At 2 am even Times Square is quite deserted, even though the bright TV screens keep flashing with the same amount of enthusiasm. After a sleepy ride to the airport and 2 more hours spend on the nice carpet floor of Gate 22 we decided to end our little stay over in NY with a real American breakfast and some donuts, before catching our next flight to Sint Maarten.

In Sint Maarten we entered an entirely different world. First of all it was smoking hot, but more important, the real ‘Carribean vibe’ was there. By coincidence it was the Holiday of Sint Maarten that day, so there where a lot of music and festivities. A nice taxi driver pointed us into the direction of a beach at the end of the runway, where planes come over so low that you feel you can touch them. The final trip to Statia took only 20 minutes but was maybe the most interesting. We crammed ourselves in a tiny airplane for 16 people in which you can just look into the cockpit and that made an awful lot of noise at take-off. All went down fine though and 35 hours after I left I finally arrived at Statia. If the entire stay is going to be as exiting and divers as the journey I will be very happy!