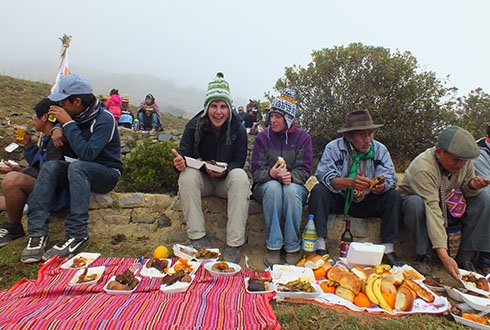 The last weeks I couldn’t write a lot of stories because I was very busy with my internship activities and research. But I finally found time to tell about one of the most bizarre experiences I’ve had in San Pedro de Casta.

At the Universidad Catolica in Lima works a former-Wageningen student: Sonja Bleeker, as a teacher. During my stay in Lima I visited her multiple times to discuss the situation about water in Lima. She provided me with some tips about Lima and eventually she invited me to join her to a Champaria in San Pedro de Casta. A Champaria is something very typical in the  villages in the mountains of Peru. The Champaria is a festival of multiple days in which cleaning of the water systems is the main focus part. During this festival the comuneros, important farmers, clean the water systems in a traditional way. A lot of singing and dancing is involved and of course a lot of food.

We arrived on a Wednesday early morning. That day there was a horse running game that we visited. During the Champaria, the village is divided into four different groups all with their own colours and songs. During the horse run these four groups form the four teams. An area was a little bit higher than the village itself and young men drove on horses from a very steep slope into the village. The run didn’t take very long but it was very exciting to watch. We were standing between the rest of the villagers who were screaming their longs out while the boys came running down. Sometimes horses arrived without a rider and a while later you could see a person running downhill with some blood on his clothes. After the run everybody celebrated the wins with a lot of beer and some prices were divided. The prices varied between wardrobes and sound systems but the boys who won seemed fine with whatever they got as long as some beers were involved. Because we woke up that morning around 5 A.M. we stopped partying early after a few beers and went to our bed.

The next day we would go on a hike to Marcahuasi, which started around 6AM. Together with an engineer from the village, we started our hike to Marcahuasi. The hike took us 4 hours and was pretty though because of the altitude. Marcahuasi is an old Inca site where we found ruins of an old Inca city, stones in the shape of an Inca face and a lot of other shapes and some old reservoirs that were used for refilling the groundwater table. The old engineer explained us a lot about the plans of restoring there reservoirs and other projects which might start there in the future.

After our visit to Marchuasi we walked back to the village and our way we found the villagers busy with the Champaria. Halfway on the slope you can find some reservoirs which the men were cleaning while the women were singing songs about the water. As I told before, the village was divided in four different groups and these different groups were each cleaning their own reservoir or lagoon which were all connected by small channels. When the upstream lagoon or reservoir is cleaned the group walks alongside the channel, with the mayor and other influential people of the village, to the next lagoon or reservoir. This goes together with a lot of singing, dancing and drinking beers.

Eventually everybody was gathered at the last reservoir. All the man of the different groups had to clean this last reservoir together. In the middle of the reservoir there were 4 guys dressed in traditional clothes with some whips. Sometimes they whipped some of the guys and they were screaming all the time. The men who were cleaning the reservoir seemed already pretty drunk and it didn’t really seem they were doing a lot of useful cleaning. Meanwhile the women were bringing food from the village to the reservoir and when they finished bringing food they started singing songs for the men who were “cleaning” the reservoir. During this all we had a conversation with the mayor of the village who invited us to have lunch with him and his council.

When all the “cleaning” was finished everybody sat down on the field. We were sitting next to the mayor and his council and waited for what was going to happen. At the same time, the mayor started talking about the value of water and how important water is for life, the women brought us food. In front of our feet they laid down fruit, bread, wine and a big amount of chicken. The picture I included with this story is token halfway our lunch. You can still see the food in front of us and we haven’t been able to finish all of it, of course. The food you can see on the picture was for 5 persons! As always the food was delicious and we didn’t need any dinner or breakfast the next day.

After the lunch we went back to the village. The people of the village were split up into the same 4 groups again, all dressed up in their colours and started singing their songs and waving big flags. In these groups we walked down back to the village. I was so full of the food and wine we drunk and tried to sing along without understanding the lyrics. It was very special to walk around between these people who are so proud of their traditions. I felt out of place because I was such a giant who didn’t really understand what was happening while weird dressed men where using their whipp and all the people were singing different songs.

I’m sure this is an experience I will never forget! Water is not only a thing to grow crops or to wash your hands in, here in Peru water is a part of their culture.