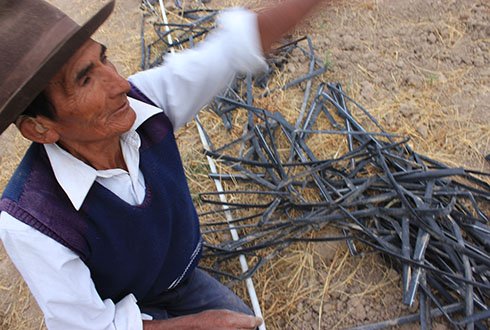 As a part of my internship I have to visit different kinds of projects in the context of water management in Peru. Together with the organisation I’m doing my research for, AQUAFONDO, I have been on a field trip in the watershed of the river Lurín. For 2 days we went on a so called road trip through the mountains and visited projects such as reservoirs and irrigation systems which have been subject of change. Together with a co-worker and another student, we went on our road trip in a minivan, which was way too small for tall Dutch people. In the van full with food and Peruvian music, we had some awesome days.

On the picture you see a very old Peruvian farmer with some tubes for a drip-irrigation system. We have discussed this technique in the college rooms in Wageningen but now I could see it in real life. Before this system was introduced, the farmer just flooded his fields with the available water. This is a big waste of water because it is not efficient and a lot gets lost by evapotranspiration and surface run-off. The thing is that there is a big problem with water in Peru, especially near Lima. Lima is the second biggest city in the dessert in the world and now due to climate change the water problems only have increased. There is not a lot of water available so if it is even possible to flood the fields, it’s making the problems downstream even bigger.

With drip irrigation you use tubes (which you can see on the picture), with small holes in it, to irrigate the fields. You connect the tubes to a water source and let water flow drip by drip to your crops. In this way the water is used way more efficient and you don’t have big losses.

The farmer on this picture is included in a project of AQUAFONDO and some other organisations in which they try to promote the use of drip irrigation. The farmer was very proud to be part of the project and told us how much his yield has increased since the use of the drip irrigation. We have spent almost an hour to inspect all the parts of the system and he let us have a taste of the fruits he was cultivating.

It was awesome to see a technique we learned about in the classrooms now in real life. During the road trip, I was thinking about how much I have learned during my trips in Peru. To experience the theory in the field is very interesting. It gives an extra dimension to my own study programme to see a farmer being so happy with a technique I’m learning about. During my trip I sometimes had the feeling that I just wanted to travel but right now I have the feeling that what I’m learning in university is important in the real world and should be distributed more so that we can use the planet in the right way for our demands.