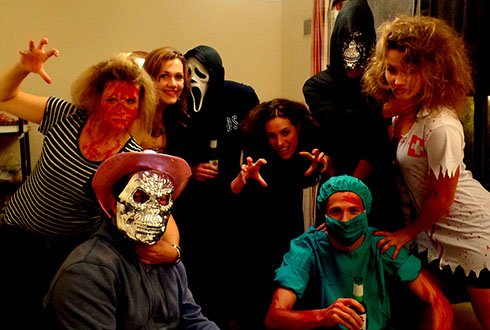 I hardly can believe it, but my calendar says that there is only one month left before I’m flying back to the Netherlands. Because there are still so many things to do, the next four weeks will fly by even faster than last few weeks did. As almost everybody I also have to admit that there is so little time left for writing this blog while being abroad. This weekend Bregje & Jessica, two friends from Wageningen, will set foot on Irish soil. Of course I’m really looking forward to it! Next weekend ESN organises a trip to Cork and the weekend afterwards my brother Chris is coming over to go to a concert by Ben Howard (a very good birthday present in my opinion!). The last weekend before I’m leaving you’ll probably find me in the library, since three of my exams are planned the week before Christmas. So I definitely won’t get bored and will enjoy my last month in Dublin.

The last few weeks were all about family. As I’ve already mentioned in my previous blog, four of my cousins and both of my brothers planned to come and visit me the last weekend of October. The weekend was as crazy as it was expected in advance. My living room was full of air mattresses, ‘pepernoten’ literally could be found everywhere, bags of crisps, beer cans; the family was arrived in Dublin. The songs ‘Cockles and Mussels’, ‘Whiskey in the Jar’ and ‘I’m gonna be (500 miles)’ can be dreamed by now; the repertoire in the Irish pubs isn’t that wide unfortunately.. Without a doubt All Saints’ Eve was the best night of the weekend. None of us ever celebrated Halloween before and definitely not in the unique way it is celebrated in Dublin. Since Halloween has its origins in Ireland, the country still can be seen as one of the best places in the world to celebrate it. The whole city was covered with spider webs, blood spatters could be found everywhere and Temple Bar was overloaded with zombies, witches and other most crazy and horrifying creations you could think of.  Of course we couldn’t let this opportunity pass by, so all face painted and dressed up we had an amazing night. After a good breakfast at the ‘Queen of Tarts’ on Sunday morning, they all went back to the Netherlands. Some revalidation was needed afterwards, but the great weekend was more than worth it!

Last weekend even more family came over. On Thursday November 13 my parents arrived at Dublin Airport. After such a long time with only seeing them via Skype, it was great to see them again in real life. Finally I could really show them where I’m living, my university and my city. On Thursday evening all Christmas lights were officially switched on, a well-known event among the Irish people. Since all street artists are changing their repertoire into Christmas carols, the aroma of glühwein can be smelled at the local markets and the shops are overloaded with Christmas presents, Dublin is getting ready for ‘Nollag’. Friday afternoon we went to Howth. Although we actually left a little bit too late and it was already getting dark, the view was as beautiful as last time I visited the little city on the coast. At dusk we enjoyed a great view with millions of lights from the city centre. Of course we also had to taste the best Fish & Chips of Ireland. Our opinion: “Good, but not more than that. We still prefer a portion of Dutch ‘Kibbeling’.” On Saturday we acted like real tourists and did a tour at Trinity College, went to the Chester Beatty Library and Christ Church Cathedral and ended our day with a dinner at the highest located pub of Ireland: Johnnie Fox’s. Because my parents wanted to see even more culture, Saint Patrick’s Cathedral, the National Gallery and the National Museum of History were visited on Sunday. The weekend went by before I even noticed. Besides a lot of culture, my parents also had to admit that they haven’t seen so many pubs in one weekend for a while. Yes, the Guinness and Irish Coffee were popular. On Monday morning my classes started again, which meant that I had to say goodbye to the holiday feeling and of course to my parents as well. All together again a very good weekend with great food and lovely people around me!