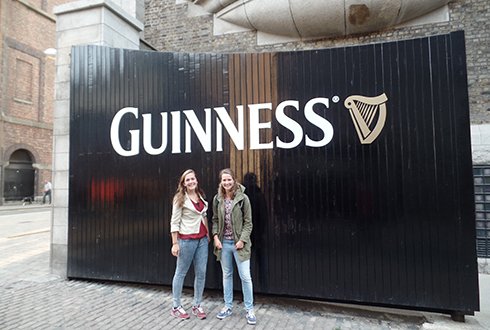 My adventure started on Friday the 5th of September, the day that I arrived in Dublin. At that very moment, I had no idea what to expect. Now, already one and a half weeks after that arrival, I’m writing my second blog in the heart of Dublin. Days have flown by. At the moment that you are stepping out of the plane, you really cannot imagine what is waiting for you. An unfamiliar city, different people around you, a new home and another university and language. It just felt like my introduction to Wageningen. My lectures started last Monday, but the days before I have been quite busy as well. Together with Catijn and Sarah I have already explored a lot of Dublin. Let’s start at the beginning.

Already at Dublin Airport it was clear that we arrived in Ireland. An older man was helping us in finding the right bus and directly said: “Don’t worry, everything is poorly signed, but hé this is Ireland!”. And he was right, signs that give you guidance in finding the walking direction that brings you to your destination are redundant amongst the Irish people. Fortunately there are always more than enough friendly people around who are very willing to help you. Only by opening your map they, even without asking, already want to offer help. It might not be as efficient and fast as we are used to, but you will always find your way. During our induction this was confirmed again. Lesson number one: : “Tóg go bog é”, or for the ones who haven’t gained fluency in Gaelic yet: “Take it easy”. In Ireland they just don’t plan long in advance, and if they do they probably will change it at the last minute anyway. They just see how it goes and above all don’t stress out. This was the answer on the very vague and little information we had gotten in advance about our induction, modules and academic calendar, or actually didn’t receive at all. The only sureness we had at that time was that the university gave permission to our exchange, we still had to register officially of course.

Happily everything is much more clear now. I’m settled at 29 St Augustine Street, Dublin 8 together with a very nice German housemate, Sarah. I have also registered about all my modules. In a typical Irish way our Erasmus coordinator was still abroad at the moment that our, still not chosen, lectures already started. However, in the end we have even managed to follow modules at schools that have no official exchange contract with Wageningen University. Our finally chosen modules would never be better at other universities in my opinion. The next few months I am following courses in Food Innovation & Entrepreneurship, Food & Pharmaceutical Instrumentation, Sensory Evaluation, Gastronomy and believe it or not, Spirits & Liqueurs and Wine Studies. Both last modules are given in a classroom that is transformed into a real bar and we will get lessons from one of the best sommeliers of Ireland, sounds great isn’t it!

As I have said before in my first blog, this exchange isn’t only about studying. The last couple of days I have seen a lot of the city itself. From the Phoenix Park, the National Gallery, the Chester Beatty Library, Trinity College, Dun Laoghaire, the Galsnevin Cemetery to Temple Bar, St Patrick’s Cathedral, the National Botanic Gardens and the Guinness Storehouse. Without doubt there is more than enough to do in and around Dublin, so my to-do-list becomes bigger and bigger. I have also met a lot of new people and made some friends. Especially the ESN (Erasmus Student Network) activities are very nice and almost always end up in one of the pubs with a glass of Guinness in our hands.