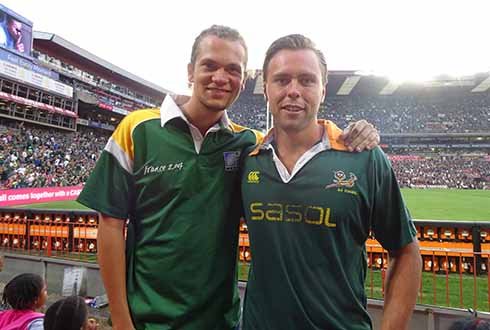 A visit to South Africa is obviously not complete without attending a rugby game. We had the luck that South Africa was playing New Zealand in Johannesburg, which is according to rugby fans, the best game you can possibly witness. Obviously, when we heard this, we bought some tickets.

A week before the game two very nice couples stayed at the WOTC. Next to having a really good time with them two of them also told us they were planning to go to the game. As we are not familiar with Joburg they invited us to their home to show us the city and take us to the game. Wonderful people!

Excited as we were we left the comforts of the WOTC for a few days to go to the big city. For us this was a big change in comparison with the quietness of the bush. Nevertheless, it was good to be out again! After an almost crash with an incapable driver we safely arrived at Siggi's and Rona's home. That evening they took us into Joburg for diner at Sandton City. At Mandela Square we had delicious Greek food and a really good time!

Although sleeping in a luxury tent for a couple of months is not problem for me it was nice, though, to have a comfortable bed again. Rested, we continued our tour of Joburg in Soweto, the famous townships. With Siggi, who arranged a local guide, we went to Soweto to see some really interesting places especially regarding the revolution which ended the apartheid.

Although me and Sander did not have places in the stadium close to Siggi and Rona we did travel with them, and two other friend of them, to the game. So with a packed car we arrived at Ellis Park Stadium. From there we went separate ways to find our seats on the second row, very close to the grass! With the arrival of the players on the field (enormous guys!) the atmosphere started to build up. The New Zealand players did the famous Haka, which I was dying to see after my trip to New Zealand two years before. Than the game started! “Beast!” the crowd roared every time a black SA player obtained the ball and Bokkie, the South African mascot, initiates waves that went through the whole stadium. Eventually, 2 minutes before the end of the game the score was 25 for SA and 26 for  NZ. However, the referee appointed a penalty kick to SA. The captain of the South Africans had to lay the ball down in the middle of the field and had to kick the ball from there through the posts. The tension was really rising on that moment in the stadium. When he kicked, the ball spun in the right direction high up in the air. However, I couldn't see if it went through the posts. Nevertheless, the whole stadium exploded and I immediately joined the fest that followed. SA had finally won again from the best rugby country in the world!

After the game we searched for Siggi and Rona who were at an after party. We were not invited, however, they managed to get us in which meant free food, very nice people and good music. Perfect combi for every student! Siggi and Rona thanks again for the wonderful times in Joburg and the WOTC! During my travels so far I have noticed that I appreciated those moments, in which people take you into their homes just because they like it, the most. Please let me return you the favor in the Netherlands!

The next morning we left Joburg, energized again by the vibe of the city and ready for some more research!