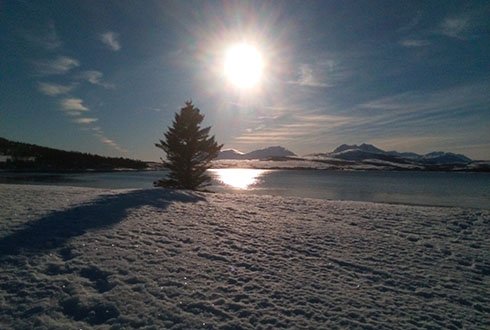 Time flies when you're having fun and when there is a lot to do, which definitely counts for me here in Tromsø! The last couple of weeks were mostly about friends and family visiting me, to see if my great stories are really true.

After Krista and Femke left, I had ten days of rest and then my sister came visiting me for a long weekend and right after her a friend from back home, Iris Griffioen. She came for a whole week.

In my ten days of rest I did a lot of fun stuff with the new friends I made here, like skiing with my German friends and bowling with my Spanish friends.

With my sister I also did a lot of fun stuff: Watching aurora's, visiting musea, watch a seal show, hiking, go for a nice long walk, but also chilling and drinking coffee or watch a movie at home. So that was a nice weekend.

The day after my sister left, Iris came and she had a lot of wild plans, like dog-sledging and watching moose. In Tromsø, you can do a lot of stuff, but most of the things are also very expensive. Besides that, I also have my lectures and group work which I have to do. So the first day she went up the Fjellheisen on her own, but she got lost, so we did that again on friday. Same as with my sister, it was a hard walk because of the hard wind and snow. Luckily, on the top of the mountain there is a cable car to go down, so that saves a lot of effort.

We tried the moose watching on Hákøya, but without any luck. We saw a lot of moose poop and traces of the moose, but no moose... Despite that, it was a really sunny day (which are rare here nowadays) and we really enjoyed the environment! (see picture)

Qua northern lights we were very lucky, because a few meters away from my house, we saw an amazing aurora! I've never seen so many pink in the air, beautiful!

At the moment I'm very busy with the preparations of two weeks excursion to Greenland for my course Arctic Biology. For that, I need to buy a lot of warm, water resistant clothing and boots. But I'm really looking forward to it! If it was up to me, I'll leave today in stead of 15th of march.

I also hope that we'll see the eclipse, because you could see it on Svalbard at the 20th of march and we're sailing right underneath Svalbard.

So my next story will probably mostly be about that excursion.