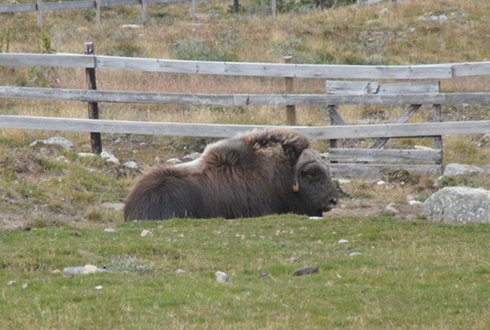 I think I’ll just keep on writing about special topics for now, since not that much happened since last time, except for more excursions of course ;) So, topic of the day is wildlife. It was not the first thing that popped into my mind when I thought about Norway. I was more focusing on the mountains and the glaciers. But it makes sense of course, since there are a lot of forests and not a lot of people here.

So what have I seen so far? Let’s start with our friend on the picture. It is a Muskox, a type of ox that reminded me most of a character from the ice age movies. There are a lot of them in one of the many national parks in Norway, where I went with two friends for a weekend camping trip, which was really nice. Even though they are “peacefully vegetarians” according to the sign in the park, it is still not smart to go really close because they can feel threatened and they will probably win if you get in a fight with them. This one was as close as is allowed to (200 m), maybe even closer. We did not see him initially, but he lied down and looked like he wasn’t really bothered by us, giving us a good chance to take pictures.

Then we have some other animals. We saw porpoises (small wales) jump out of the water when we were crossing it with a ferry and later we also saw some movement in the water, indicating a chase of the wales on fish. There was also a seal waving at us. Up in the air we saw a couple of white-tailed eagles. And last we also found some animals on land. When we went to watch Northern lights (one of the highlights so far that I will save for another story ;)) we arrived in a field with six deers watching us and, after that, running down a hill, which I thought was pretty cool. The next morning we woke up to a really weird screaming/barking sound, which after research turned out to be a fox.

And last but not least, we still have the “boring” animals left. For instance cows, that make themselves less boring by walking on the road and blocking traffic. And don’t forget the sheep, they have a lot of them here. It is allowed to cross meadows, as long as you close the fence to prevent the sheep from getting out. However, there is no guarantee that you don’t get attacked, something that almost happened to me when I was alone in a meadow and an entire group of sheep came running up to me. I have to admit I was pretty scared, but it turned out they only wanted food.

So, that’s enough animal talk I think ;) I still have lemmings (really small and aggressive rodents) and moose on my bucket list, so who knows. Next time I will hopefully tell a bit more about what I’m doing here again, in this case probably about my holiday :)