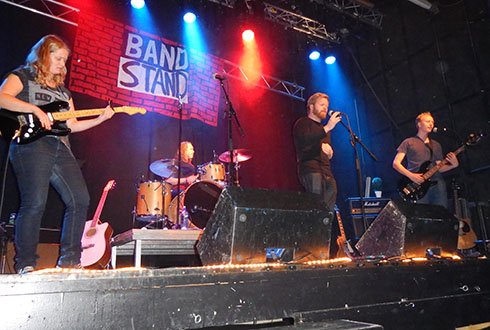 After the exam rule picture, I got another shot that I really like. On this picture I am performing at “bandstand”. It took some effort to get there though.

When I got here in summer I joined the student association here. They have different clubs, like a dancing group, a student newspaper (that I joined too) and a band group. Since I really like to make music, but did not play in a band before, I was really excited about this. However, it was kind of difficult to get people together, since a lot of people had a band already. I kind of gave up on the dream when I saw that someone was still looking for people to play with on band stand, and before I knew it we spend one week practicing full time. We managed to play four songs, and a big group of my class came to watch, with slightly embarrassing but really nice signs. All in all I had a great time.

Since I’ve been talking a lot about differences with studying back home, I would like to point out some similarities. Since this is also a small town, even a lot smaller then Wageningen, and because of the mountains not close to any bigger city, you really have to make it fun here yourself. So there are some active student associations, that organize all kind of stuff: from sport events to concerts, and from camping trips to parties. And it’s not hard to run into people that you know.  Also I have a small (18 people) but very fun and active class, so if there is not anything going on, we just get together at someone’s place to play games or go out in the weekend to other places.

I won’t name all the stuff that I did here, since I can’t remember it all and it wouldn’t be interesting either. But one really awesome night was when I went to a concert from Cascada (from “everytime we touch”). Since I joined the newspaper here, I got to meet an interview her. Unfortunately I don’t have a picture to prove it, so you just got to believe me when I say it was awesome. Life is not that bad here.