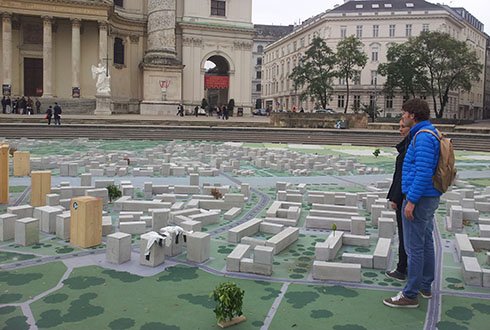 Last weekend I saw something interesting I wanted to share with you. My sister and brother in law were visiting me and we had a walk in the city centre. Suddenly we saw this thing you can see in the picture! For me it felt a bit like I was in the Netherlands again, because it reminded me of ‘Madurodam’.

Actually I’ve never been in Madurodam, but that doesn’t matter ;). In front of the beautiful Karlskirche was a miniature city, build by the students of the technical university of Vienna (TU). This city, called Hypotopia, is a fictitious city worth 19 billion euro. That 19 billion euro also fictitious of course.  The city was built to visualise this unimaginable amount of money. Why? This 19 billion euro is the amount of money that Austrian taxpayers may have to pay to come up for a collapsed bank in Austria. So, it is a protest against the sum of money that will be spend to rescue the bank instead of spending the money to – as an example - build a city for more than 100.000 inhabitants.

With this Hypotopia city they want to show the government how much money 19 billion euro actually is. For me it shows that Vienna is not only a city full of tradition, but also full of young people with critical minds and innovative ideas for a sustainable future. Hopefully the project is a big success for the students!