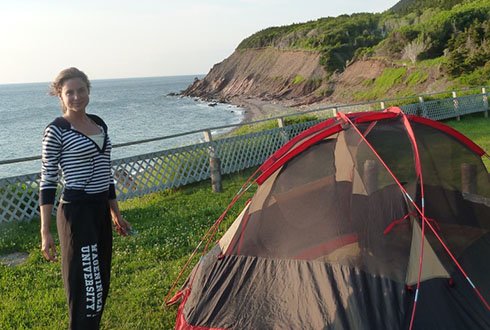 After my field trip I had several days off, since we worked long days and through the weekend. I went to visit my boyfriend in Nova Scotia and as the name tells, it is the ´new Scotland´ and it really feels like it! There is Gaelic music playing, and for Canada day (1st of July) there was a parade of people playing bagpipes. Also there are a lot of breweries. People like their beer and probably Whiskey.

Nova Scotia is almost an island, so the coastline could almost resemble the Scottish coast and it makes sense that Scottish people settled in this part of the country. Traditional square-dances take place and the street names are in English and Gaelic. After being in Thunder Bay, Nova Scotia seems like a completely different country. For the week, we went up the coast and camped on the seaside, where luckily no big campers were allowed. These campers are very common in Canada and can almost convert into full houses. So you don´t want to be staying next to those in your little tent. The nature is beautiful, with lots of forests, rivers, and cute little villages along the coast.