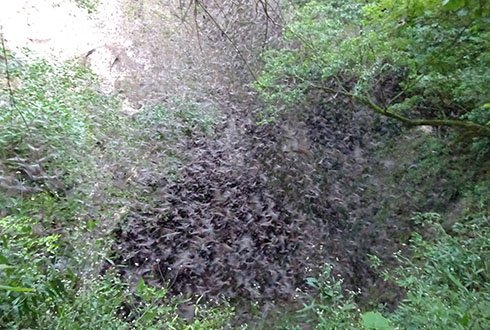 Sometimes blogging is actually more difficult than I thought in advance. In some occasions the writing is difficult. I don’t know for example how to start my story or how to keep it interesting (I hope I succeeded in that in my other stories). This time it is actually totally different. I have enough ideas for writing my story, but I had some difficulties with choosing my picture. I just did too many nice things last weekend for one short story. I could for example post a picture of me in a zip-line 60 m above a cenote, but that would make you so jealous that I didn’t dare to use that picture. I could also post a picture of our goal and final destination of last weekend: the absolutely stunning tropical forest and ruins of Calakmul. But as I said, I don’t want to make you too jealous so that is why I chose this rather vague picture which shows you something that was absolutely amazing.

What you see in this image is just a small fraction of 1-5 million (!!!!) bats that leave the cave daily. Before I came there I knew there would be some bats, but when I saw that it were so many my jaw just dropped, so to speak. I also had to close it immediately  to prevent the bats from flying inside my mouth. Of course I am kidding about that, but it is true that sometimes a bat hit us.

The only thing I can actually say about the event is that it was just really amazing. Every second a lot of bats came out the cave and it just kept going on and on and on…. Sometimes it seemed to get less but than 1 minute later or so it was again completely black because of the bats. Except for one moment when there was a white bat amongst all the black ones. That was very nice because now we were finally able to see how the bats left the cave in circles. Just about than it was also time for us to leave the cave and to go to bed in order to wake up early the next day to see even more animals.