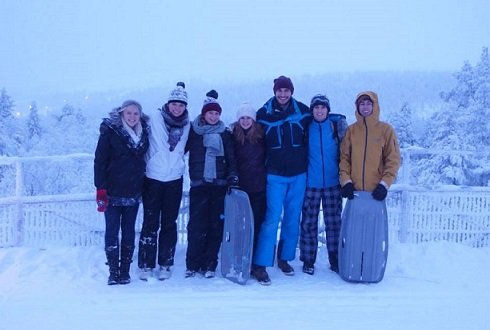 Words cannot describe what an amazing and unique trip it has been to the most north tip of Finland, but I will try to give an impression of the journey in this story. After a lot of planning, gathering warm clothes and snowboots (thanks to my parents for bringing them with them), and discussing what to bring and what to leave in order to be best prepared for the cold as possible, the time was finally there. At six o’clock in the morning we were on our way to Copenhagen airport to catch our flight to Helsinki and from there, to go to Lapland by bus. A very early start to an amazing week full of snow.

When we arrived in Helsinki, there was no snowflake to be seen yet. But about 30 minutes later, the whole city was covered in a white blanket, extremely appropriate to make the best snowballs and get into a snowball fight at every cathedral or statue we stopped. And we never got bored of it, because that is what we did all day while strolling through Helsinki. It was as if the weather wanted to give us a preview of what was coming higher north, because this was also the first snowfall in Helsinki that year. When we left by bus that evening it got whiter and whiter the further we got north. On the long way, we visited a wildlife zoo where we saw polar bears and reindeers and then crossed the arctic circle at the Santa Claus Village. We had already heard some rumors that this village would be the most touristic place ever and that was definitely not a lie. If you wanted a picture with ‘the real santa claus himself’ you had to pay a ridicules amount of 40 euros and the rest of the village was packed with shops full of gloves, blankets, Christmas decoration and post cards. After the stop at santa claus village, we had to drive another couple of hours to arrive at the Lidl, nearby our final stop: Saariselka. Because this was our last chance to do ‘cheap’ grocery shopping, me and my other cottage-roommates loaded bags full of food to eat and cook the upcoming weak. After some trouble fitting it into the bus besides the other bags we left to go to our cottage, finally!!

In my next story I will tell you about my Sinterklaas celebration in Sweden.