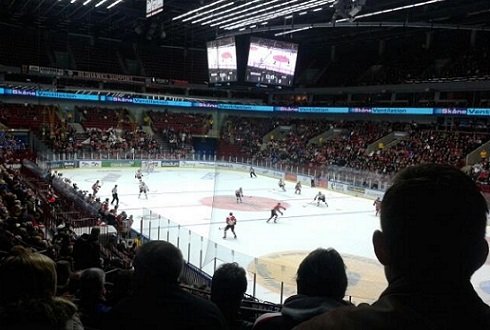 Wow what a spectacle! I had never been to an ice hockey match before, but definitely wanted to go to one since this is a pretty big thing in Sweden. We went to the Malmo Arena to watch the Malmö Redhawks play against Karlskrona HK. This match was everything we expected it to be and even more. The two clubs brought their mascots and there was also the MacDonald’s clown randomly walking around the tribunes.

At the start of the game, a big inflatable tunnel was set up and with a lot of smoke the players of Malmo Redhawks came storming on the ice field with a loud applause. After the tunnel was broken down again, the opponents came to the field almost unnoticed. I felt a bit bad for them, but they must have their fame in home matches. The tribunes behind the two goals where reserved for the extremely dedicated icehockey fans. Dressed up and painted in the colors of their teams. When a goal was scored, big flags were released and dropped over their heads on which the logo of the team was visible. I knew that icehockey was a rough game, but sometimes it seemed to me that the icehockey players were just fighting on the field while the referees didn’t care a bit. It was a close call, but in the end, the Malmo Redhawks won the match and the hawk mascot was happily dancing and cheering while the public went crazy. And although we didn’t really have a preference for one of the teams, we got totally dragged into all the enthusiasms and the ambiance and ended up cheering just as loud as the rest!

In my next story I will talk about my adventures in Lapland.