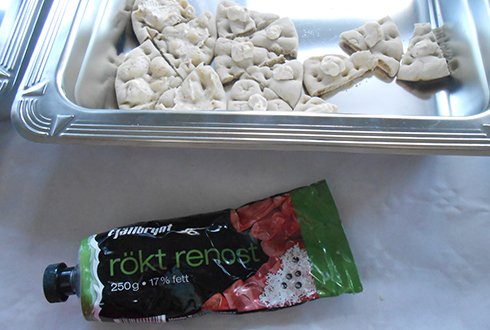 Fika
A Swedish word you can’t learn fast enough when going to Sweden is ‘fika’. Fika is a word with a very broad meaning, but most people use it as an excuse to take a break from whatever they are doing and have a large cup of coffee or tea with some cake, chocolate or other sweet things. Everyone here agrees that you can’t fika often enough (yes, it is also an actual verb in the Swedish language).

Already in the first week, I’ve learned and experienced that the Swedish people love to barbeque. It seems like they want to get everything out of the last sunrays, while winter is approaching (which scares me a little bit for what is coming). I’ve had a week in which there was at least a barbeque every night (if not afternoon as well) and I couldn’t see another hotdog again. Also, in a lot of public places (I’ve even seen them in the zoo) you can find picnic tables with little barbeques on the side, to prepare some meat from home (or something?)..

A thing that we do a lot here with the international students is preparing ‘potluck dinners’. It is a dinner for which everyone cooks a typical meal from his home country. It is a very nice way to taste a lot of different cultures and get to know traditional dishes from all over the world. When we did this with our guild, I made ‘hutspot’ with pieces of bacon. The other international students were especially amused by the texture and the sound it made when ‘throwing’ a spoon of hutspot on someone’s plate. Surprisingly almost everyone liked it! Besides the hutspot we had homemade pizza, lasagna, bruschetta, pasta salad, hamburgers, rice cake, a Portuguese and Swiss cocktail and a lot of delicious desserts among which the Swedish ‘kladdkaka’! There was so much food that we ended up with a lot left.

In the second week of my stay was the ‘taste of Sweden’: a food fair where we could taste all the different Swedish specialties. Turns out that Holland is not that unique with the liquorice (drop) and herring (haring)! While the Dutch people enjoyed it, a lot of international students were not so fond of these two. Obviously they served the typical Swedish meatballs (not from IKEA this time), some very salt butter (they really love salt in Sweden) and a lot of weird things in tubes, like for example ‘renost’ which is cheese spread with reindeer meat in it. For some reason they tend to eat most as possible out of tubes here. Last of all, we got some delicious pastries. The very Swedish ‘kanelbullar’ and the ‘chokladbullar’ are certainly something worth trying to make myself at home.

In my next story I will tell you something about my visit to Nimis.