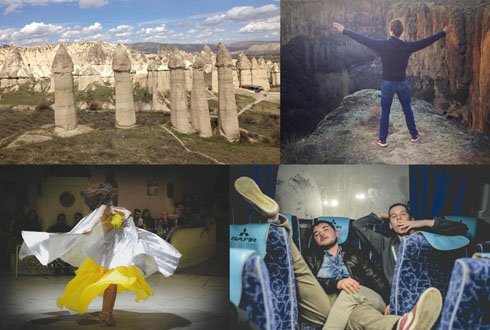 It’s been a while since I wrote you guys. The workload of school is getting bigger and I had many other things planned. I was also editing a video I wanted to ad in this blog. Since I’ve never edited before it took me some time, but it’s finished now and I’m happy with the result. This weekend I have time to write about my experiences last weeks and I promise I will try to write more often in the future :).

So, what happened last weeks? First of all, some very good news. Tom flew back to the Netherlands and returned with his passport. The moment he got in the car to the airport and drove away, I realized that I would be on my own in Turkey. I didn’t had my friend anymore to talk Dutch to. For me it was a little bit weird not to speak in my own language for so many days. It stays something what is familiar to you and somehow belongs to you in a certain way. And of course, I wasn’t on my own in Turkey without Tom. I had my roommate and all my new friends I made in Izmir. We hanged out, went to the cinema and to the city centre. I had a good week. Nevertheless, it is still good to have Tom back now.

Another great experience was the Cappadocia trip. The Erasmus crew organised a trip to this amazing place from Thursday evening until Monday morning. But, before we went to this place we had to take a bus drive for 12 hours. In the bus, the party already started and most people didn’t had much sleep in the night from Thursday to Friday, haha. We arrived in Cappadocia at approximately 9am. Before we went to the hotel we got to see some places. With our sleepy eyes, it was a little bit hard to capture the nice view, but man, it is beautiful over there.

One of the places we went to that morning was the Uçhisar Castle. From the top of the castle, you had beautiful view of the surrounding landscape. After the morning program, we were happy to arrive at the hotel to freshen up and relax. Some people who still had some energy left went to the gym, others took a nap and I went to the swimming pool with some friends. The hotel was good. We stayed there with all the Erasmus people, including the Erasmus students from the other four universities in Izmir who went to the trip.

When you type in Cappadocia on google, you will find many pictures with balloons floating in the air. The balloon flights are one of THE things to do in Cappadocia. I really wanted to experience this myself but unfortunately, because of too risky weather conditions, the flight was cancelled. This was a pity but there were many other nice things left to do and see. On Saturday, we had a busy program. We went to the Rose valley, Paşabağlar, 3 Güzeller, tasted wine in the Turasan Wine House and went hiking in the Love valley. Especially the hiking in the Love valley was one of my favourites. The sun shined, the view was beautiful and the atmosphere and people where great. Many pictures were shot that afternoon...

After the busy day program, we went back to the hotel for diner and dressed up for the Turkish night. The Turkish night was at another place, half an hour drive from the hotel. It is a bit hard to describe the location but it looked very good. There were several performances of traditional Turkish dancers and belly dancers. After the performances, it was our turn to take the stage and show our traditional dancing skills. This wasn’t a problem because the night included unlimited alcohol ;). After the Turkish night many people partied on at the hotel till late...

The day after, Sunday., I got out of bed with a hangover, and a wild guess says me that I wasn’t the only one. The schedule didn’t had any mercy for us. We woke up around 8 o’clock for breakfast and packed our stuff to check out at the hotel. After this, we went to Göreme where we had some free time. I decided to go on an ATV ride. This seemed the best thing to do after a night with unlimited alcohol and a gigantic hangover. There we went. More than 30 people (most of them never drove an ATV before) with two guides trying to keep the group together. The only instructions before the ride where how to give gas and brake. The gas cable of my ATV broke after 10 minutes. Luckily, Mouad stood next to me with his dirt bike so I could hop on at his bike. Sitting on the back of the dirt bike gave me a good chance to film the rest of the ride. So, the failure of my ATV worked out well and you can see the result in the video at the link below. The fresh air riding the ATV and dirt bike did me good. It was so much fun! After this crazy ride, everyone went back to the bus and we drove to Kaymaklı Yeraltışehri. This is a village in a cave. We had to walk through narrow corridors. It was a gigantic maze and although I thought we saw a lot of the place, the guide said we only saw a small percentage the village (I forgot the real percentage :p).

The last destination of the trip was Ihlara. We had an amazing view at the valley. Ihlara valley is a 16 km long gorge cut into volcanic rock in the southern part of Cappadocia. After a last look at the view we all got in the bus for the way back home to Izmir. The way back was a lot quieter. Most people where a bit tired and tried to get some sleep, dreaming of all the things they experienced this weekend. During the way back, one of the students got sick so we had to drive to a hospital to get her some treatment. Normally this would be a shitty thing cause after such an exhausting weekend you want to go home fast and jump in your nice comfy bed. But two German guys bought a ball at a small shop which was still open and we played football on the street in the middle of the night. Some Turkish boys and girls watched us from their balcony and joined us after a few minutes waiting. I think this may be one of the best examples of the positive feelings and mindset in the group. We felt almost sad that we had to go back in the bus again. The girl got some medicines and injections and the rest of the way back went smoothly. When I got home, I jumped into my bed and felt asleep immediately. It was a great weekend!

In the beginning of April, my brother and sister will visit me in Izmir. I’m looking forward to it. I can show them some nice places in Izmir and let them see where I live and study. Tom’s girlfriend will also visit Izmir in April so we will make some plans and trips together. It was a long story this time, but I also had a lot of things to tell. I see you guys later!