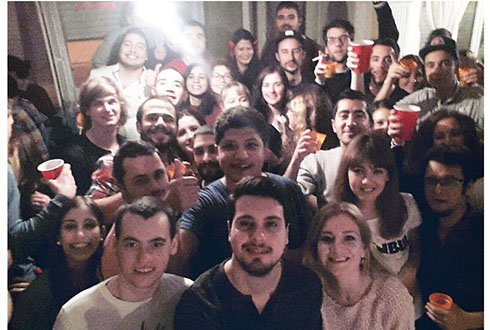 A week has passed since my last report. And to answer the cliffhanger of the last time right away... no, we didn’t found the passport of Tom. But after five or six visits to the Dutch consulate we found a solution. There was the option to choose between a visit to Ankara, to get a new passport over there, or to get a laissez-passer. A laissez-passer is a one way ticket which you can use to fly back to your home country. Since Tom already planned to visit the Netherlands sometimes during our stay in Izmir to see his girlfriend, friends and family the laissez-passer was the best option. With the laissez-passer he can fly back in March, see the people home, and get a new passport in the Netherlands to fly back to Turkey. I hope most of the problems regarding the lost passport will lay behind us then.

With the information about the passport told I want to write some other, nice, things about my stay in Izmir. Let’s start with all the house parties I had last weeks! Some people threw a house party which were all very nice. Some of them too nice haha, like when the police came over because of complaints from the neighbours. At the parties I talked to many different (erasmus) people. (Erasmus students are students from Europe who study for one or more semesters abroad in another country in Europe, just like me in Izmir). If my memory is right, the erasmus students from this spring semester come from 11 different countries. I spoke to people from Hungary, Spain, France, Slovakia, Azerbaijan, Italy and Germany (and some more countries). It’s fun to get to know all these people from different cultures. People from different countries all have a different environment where they grow up and have somewhat their own habits but the eramsus people are in Izmir to explore new things, learn more about Turkey and experience things they wouldn’t experience in their home country. The shared mindset of discovering Izmir and Turkey gives a connection I think. When you want to discover Izmir you also have to check out the night life, of course. So we already went a few times to Alsancak where the centre of the night life is. Alcohol is one of the few things that is actually more expensive in Turkey than in the Netherlands, nevertheless I had some very good nights. Last monday I also played a football match with some Turkish and erasmus guys. Drinking beer and sporting are nice things to get to know each other haha.

Partying is not the only thing I do in Izmir. I also came to Turkey to study. I had to drop some courses because I had overlap in my schedule. Last week I choose some new interesting courses to have enough ECTS (study points) to graduate. From next week you can’t switch between courses anymore. I will tell you guys on a later point more about the university and courses because I didn’t had many classes yet. I’ll have to go now. Otherwise I will be late for the party tonight. Ciao amigos!