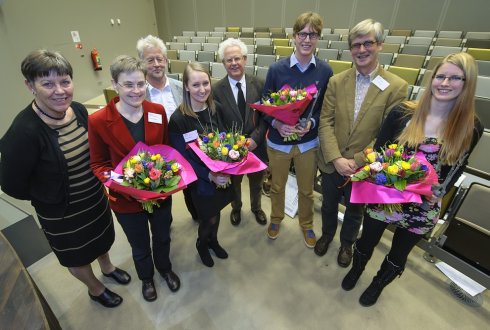 The winner of the Overall Thesis Award, Ties van de Laar (educational domain Agrotechnology & Food Science), received €1000. The other winners each received €500. In addition, everyone was given a bronze sculpture of the 'Wageningen Tree' made by Sjoerd Buisman, as well as a certificate and a jury report.


A Master’s student in Food Technology, Ties van de Laar won the Overall Thesis Award with his thesis ‘Flow of jammed binary suspensions in microchannels’. The jury described the winning thesis as an impressive piece of scientific work with considerable application potential as well. The student has combined theoretical analysis with original experimentation. "This is extremely important for the food industry", the jury concluded. “Ties van Laar has written the best thesis at Wageningen University this last year.”

The other winners of thesis awards are:

Margot Andrieu, (Environmental Sciences) , a French Master's student of Hydrology and Water Quality. Her thesis is entitled: ‘Assessment of the fate and effects of antibiotics on freshwater ecosystems surrounding catfish farms in the Mekong delta (Vietnam)’

Patrick Ilg, (Social Sciences), German Master’s student of Urban Environmental Management. His thesis is entitled: ‘Intergenerational discounting and long-term effects in the context of Nuclear Waste Management: An economic analysis of the Asse salt mine in Germany’

The Wageningen University Fund received 20 nominations in total. In evaluating them, the jury paid particular attention to technical and scientific quality, written presentation, applicability to practice and quality of the research within its scientific field. KLV Wageningen Alumni Network donated the monetary awards.