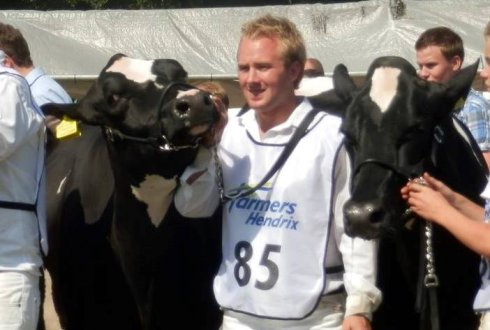 During my graduation research at the Van Hall Larenstein in Leeuwaarden I met newly graduates of the WUR. After having had worked together with them conducting research and talking about the WUR they indicated that I probably did have it in me to complete a Master’s. With this indication at the back of my mind I graduated the Bachelor’s Animal and Live Stock Farming. At the time a follow-up training was not my first choice as I had promised myself that I would start applying for jobs firstly. However, after half a year of applying I still had not had success in finding a job and with the thought “there is still more to be learned’ in mind, I decided to take the risk and start a follow-up training. The choice to do a Master’s program at the WUR was quickly made, thanks to the experiences of the newly graduates and the fact that it is the only agricultural University in the Netherlands.

At the WUR I am momentarily doing the Master’s program Animal Sciences. Within this Master’s I am mainly taking courses in the direction of animal feed because my interests lie there. New developments in animal feed and live stock feed provide for a large part of the performances of an animal.

At the start I really had to get used to the methods used at the WUR as during the Bachelor’s a lot had already been fixed in a set study program. Here there is less control and faith in initiatives taken by the student. I am pleased with the courses that I am taking: there is a lot of attention for the material, schedules are easy to follow and it is clear what is expected of the students. However, the workload is higher and I have had to do a lot more to pass courses than during the Bachelor’s that I did. All of the classes are in English which is easy to understand and follow but to make writing in English come naturally is harder than I had thought.

The Master’s program Animal Sciences lasts 2 years and I have completed one of them so far. It is doable but takes lots of effort. However, if you put that in then the sky is the limit. Students who would like to do a Master’s program after graduating the Bachelor’s at an applied science university I would like to advise to apply timely, adsorb themselves in the English language and start the first day of lectures well prepared.