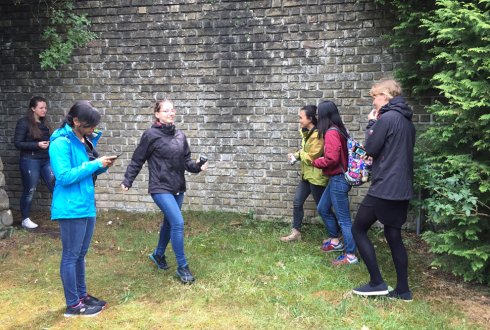 The Wall of Mussert in Lunteren symbolises a dark page in our history. It is seen as ‘dark heritage’. How to handle this in the best manner, is a recurring subject of discussion. The Foundation Heritage Ede asked the Science Shop of Wageningen University & Research to investigate how the complex around the wall could best be conserved and how new meaning could be attached to it. Together with students, the researchers of WUR undertook a search into finding the right balance between restoring, conserving, changing or tearing down.

The most important conclusion is clear: to stay away from any form of glorification and to introduce changes that bring down the megalomania in the complex, or moreover, add contemporary elements. This is to be preferred above restoration as such. Besides, the advice is given to include the complex in a wider network of the region's cultural heritage sites. Although Mussert's Wall and the complex (the former home-base of the Dutch NSB (=National Socialist Movement) are stand-alone objects, these still are a part of the wider war past. It would make sense to connect this with other objects and events from the Second World War, like the Apeldoorns Bosch, Market Garden and the Battle for Arnhem, the Liberation Route, the Diogenes bunker and Landgoed Avegoor. Such an approach would also prevent Lunteren being viewed as uniquely associated with the NSB.

A design atelier for students Landscape Architecture and Urbanism, Delft, was organised to find modern-age ideas. A competition for students all over the Netherlands also took place. The winner thought of a 'consideration centre', with an underground museum, an auditorium and a room for lectures and debates. The idea to go subterranean is considered to be new and daring, a good example of how adding contemporary elements can give new meaning to dark heritage. Besides this, the research is directed towards analysing the public debate and the way in which other countries are dealing with comparable heritage. The research has contributed to the making of a new foundation: Educational Centre De Goudsberg. This foundation will be managing the exploitation and education of the complex in Lunteren.

The complex of the wall of Mussert and the reception area in Lunteren was placed on the list of National Heritage by Minister Van Engelshoven in 2018. The complex is connected with party meetings in the 1930's of the former Dutch National Socialist Movement (NSB).  The wall, as supposedly impressing part of the reception area, gave NSB leader Anton Mussert the chance to address his membership.

The final report of this project and the jury report of the competition (mostly in Dutch) is available on the Dutch project page.