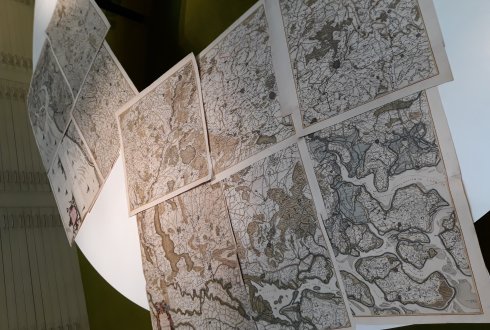 The famous Roman-Visscher map of Brabant (1692) was not complete in the department of Special Collections of WUR Library. At least, that’s what we thought.

The map Ducatus Brabantiae consists of 6 map sheets. It dates from 1692, the Dutch Golden Age. The map was published by Visscher, a renowned publisher of maps and prints, located on the Kalverstraat in Amsterdam. Visscher collaborated with publisher and book seller Zacharias Roman from Middelburg.

When we had a proper look at the collection of old maps, we noticed that 2 of the 6 sheets were incorrectly stored. Apparently, it was thought they belonged to the Comitatus Flandriae, a different but similar looking and overlapping map. The Comitatus Flandriae was also published by Visscher. In the end, the puzzle resulted in two complete map sets from the Dutch Golden Age.

Scans of both maps are now part of the image collection Old Maps and Atlases. All maps can be downloaded for free.

The 6 map sheets show the Duchy (hertogdom) of Brabant. The map sheets are detailed and beautifully hand coloured.

More information about the Roman-Visscher map of Brabant can be found on this website of Brabants Erfgoed. The Brabant Collectie has a wall map version of the map, dating from 1661, with beautiful cityscapes in the margins.