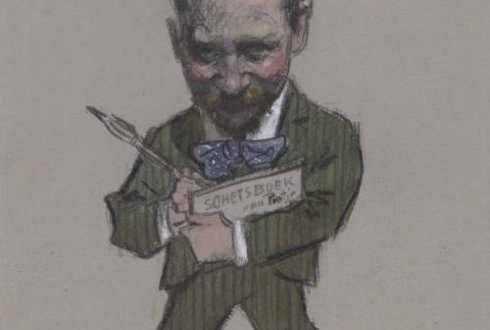 Do you want to see historical caricature drawings of WUR teachers at the beginning of the 20th century? Have a look at our new online Image Collection with caricatures of teachers and other employees of the Hoogere Land- en Boschbouwschool from around 1900.

The "Schetsboek van Pietje" (Pietje's sketchbook) is a series of 22 caricatures of teachers and other employees of the Hoogere Land- en Boschbouwschool created around 1900, by Louis Raemaekers (1869-1956). Among the portrayed professors are E. Giltay, J. Ritzema Bos, J.O.F. Pitch and J.H. Aberson. The sketchbook concludes with a self-portrait of Raemaekers holding a brush and the "Schetsboek van Pietje". The caricatures are drawn in pencil and charcoal and half of the drawings are coloured with watercolour.

New update for the Image Collections

Wageningen University & Research – Image Collections is now available with a new stable, user-friendly and responsive image viewer. The presentation automatically adapts to the viewing device. Images and metadata are shown in a user-friendly manner and the image viewer is more powerful. The update came with some new Image collections, including the so-called “Schetsboek van Pietje”.