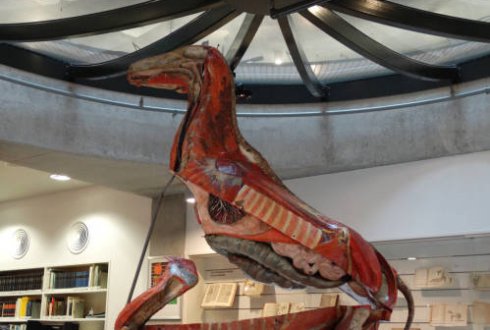 Two new sets of images have recently been added to the Wageningen University and Research Image Collections: anatomical models and drawings of apple and pear varieties.

In the late 19th century the Rijkslandbouwschool in Wageningen acquired several anatomical models made by Dr Louis Auzoux (1797-1880). These accurate veterinary papier mâché models were used in anatomy classes and are now considered to be unique academic heritage.

The most striking piece is a full-size anatomical model of a stallion from painted paper maché and iron wire. The horse's abdomen can be opened by raising its head and shoulders. Its organs are also detachable. The new Image Collection consists of 29 photos in high resolution of the horse and its dissectible parts.

The development of new plant varieties has historically been an important topic in research and education at WUR. The new Image Collection Plant Breeding consists of drawings and paintings of apple and pear varietes by H. Ramaer (1874-1958) and Prof. A.M. Sprenger. Ramaer was a drawing teacher and Sprenger a professor in horticulture. Their drawings and paintings were used in plant breeding education in the first half of the 20th century.