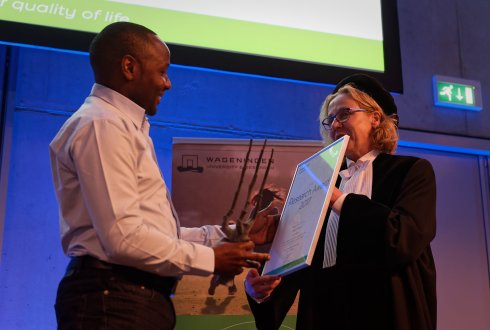 The 2017 Research Award from the University Fund Wageningen has been granted to nutritional scientist Dr Martin N. Mwangi. He was granted the award during the 99th anniversary celebration of Wageningen University & Research on 9 March. He received the prize for his incredible scientific publication on enriching meals for pregnant Kenyan women with iron, which led to higher birth weight of babies and, in turn, a better start to these young lives. Martin Mwangi received a prize of €2500 and a small replica of the De Wageningse Boom (Wageningen Tree) sculpture.

Martin N. Mwangi (1980) conducted his ground-breaking research at the Cell Biology and Immunology chair group of Wageningen University & Research. In his winning article, published in 2015 in the Journal of the American Medical Association (JAMA), he further pursues his original research to examine whether administering iron has an impact on the risk of infection by the Plasmodium parasite, which causes malaria. He did not find that it had any effect on that, but he did discover an interesting side effect. The birth weight of children born to mothers who received iron was considerably higher, specifically 150 grams heavier (3200 versus 3050 grams for mothers who received the placebo). 470 pregnant women participated in the research.

Mwangi also showed that administering iron to pregnant women via food led to increased storage of iron in the foetus, which resulted in the child getting off to a better start after birth with iron deficiencies only appearing later on. The effects of iron deficiency include anaemia. During pregnancy, this can become a serious health problem. Anaemia occurs during pregnancy in 80% of the countries in the world, affecting 57% of pregnant women in Africa.

The applicability of the research results extends beyond Kenya. Each year, 20 million children worldwide are born with low birth weights. Administering iron can be an option for increasing birth weight in multiple areas.

The University Fund Wageningen Research Award is granted to a Wageningen researcher under 40 for his or her original and prominent scientific publication. The jury makes their assessment based on criteria such as creativity, the breadth and complexity of the study, and its importance for science and practice.

The jury also held the articles of the other two nominees, Peter Bourke and Prarthana Mohanraju, in high esteem.