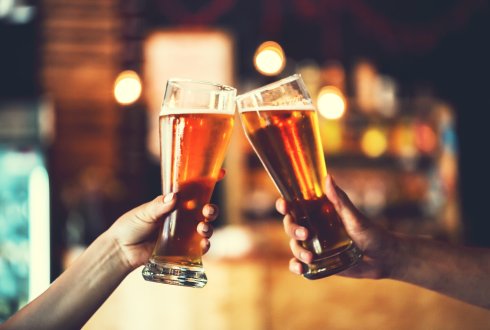 Beer is a popular drink around the world and the range of non-alcoholic beers has grown considerably over the years. Nevertheless, most consumers find non-alcoholic beer less appealing than its alcoholic counterpart. Canadian researchers Wigmore and Hinson previously found that consumers drink more of a particular beverage if they think it contains alcohol, regardless of how much alcohol it actually contains. This despite the fact that alcohol consumption should be reduced, according to the National Prevention Agreement published mid-November.

The Wageningen researchers were the first to study what exactly happens in the brain when we drink alcoholic and non-alcoholic beer. "Alcohol is known to have an effect on the reward centres in the brain. We wanted to know if the taste of beer alone could have the same effect," says Paul Smeets.

Beer in the MRI

Twenty-one men between the ages of 18 and 35, all regular beer drinkers, participated in the study. They were shown the word 'beer' or 'control' while in an MRI scanner. The researchers then gave them a sip of beer or carbonated water. The participants did not know which they were given. The MRI scanner then captured what happened in the reward centres of the brain.

Taste above all else

The researchers saw no difference between the two beers in terms of reward centre activation while there were some differences in taste-related brain areas after swallowing the beers. "This suggest that the taste of beer, not the presence of alcohol, determines the consumption experience," says Smeets. "This may mean that consumers get the same satisfaction from drinking non-alcoholic and alcoholic beer, as long as the taste is as close to 'real' beer as possible. This may help reduce alcohol consumption, but this would have to be researched further with test subjects who are aware of which type of beer they're drinking."