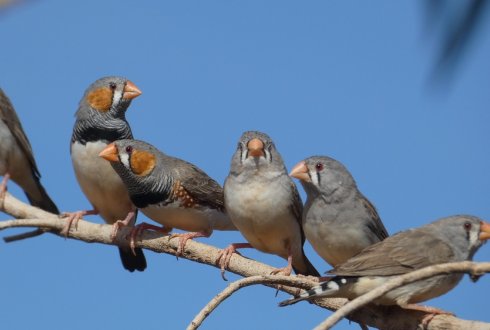 Zebra finches produce calls under high temperatures. Research by Macquarie University and Wageningen University & Research has shown that this is probably a side-effect of panting. This conclusion is in contradiction to earlier research suggesting that the birds call specifically to embryos to warn them about the heat.

Professor Marc Naguib of Wageningen University & Research, together with colleagues from Macquarie University in Sydney, conducted an extensive study of zebra finches in the Australian outback. They collected nearly 1.700 hours’ worth of audio recordings from nest-boxes in the wild and in a natural research setting. Based on these, they concluded that the calls produced by finches were positively related to high temperatures.

However, there were notable differences with a high-profile study published in Science in 2016. There, it was suggested that zebra finches produce calls specifically to warn their offspring about the heat. In contrast, the research by Naguib and colleagues shows that the birds call throughout the incubation period and not just during the later stages of incubation. The calls are more likely to be a side-effect of panting, which the birds do to cool themselves down. While it may be true that embryos gather information from their parents’ call, it does not seem to be the case that the signals were specifically evolved for that purpose.

The study emphasizes the importance of measurements in the wild. Additionally, it is interesting to see how birds adapt to extreme heat, especially in light of global warming. But earlier claims about sounds to warn embryos about the heat can be put on ice for now.