Long-horned beetles leave a trail behind them after hatching out. PhD candidate Paul Copini studies the traces of their presence left in tree rings and can say when a beetle was born. Crucial information.

Copini, nature archivist’ is how the name plate on his door should read. Paul Copini studies tree rings, interpreting history from the information locked into the form and structure of those rings. Its rings are a tree’s memory, a kind of archive to the initiated. Their numbers include Paul Copini, who currently works for Alterra and the Centre for Genetic Resources. He received his PhD this week from Professor Frits Mohren (Forest Ecology and Forest Management) for his thesis Markers inside Wood.

The markers that most interest forester and geneticist Copini are those left behind by longhorned beetles. This came about by chance. ‘Originally my study was going to be about the traces left behind in trees by floods and drift sand (see text box). What exactly goes on in a tree when such things happen? What are the consequences? And can you use tree rings to get an idea of the geomorphological history of an area? But just as we were getting going the Netherlands Food and Consumer Product Safety Authority (NVWA) came knocking at the door. "We have a maple with holes in it which might be infested with long-horned beetles," they said. "Can you tell where the insect crawled out of the tree? Was it here or in the country of origin?"

Once signs of long-horned beetles are detected the alarm bells go off. ‘If it turns out that the beetles have hatched out here, all trees within a radius of 100 metres of the infested tree are destroyed preventively,’ explains Copini. And a wider area around the spot is closely monitored by the inspectorate for years. But how do you know whether an exit hole in the tree was used recently? This is where the tree rings come in. Copini: ‘Long-horned beetles leave behind an exit hole of about one centimetre in size which is visible for years before it gets overgrown. You can date that exit hole using tree rings. The key issue for the research question is: how precise is that dating? Can you determine it down to the day or hour? The timing is important because it can have major consequences.’

Holey cheese
Long-horned beetles lay their eggs in the bark of a tree, says Copini. ‘The larvae that come out of the eggs crawl deeper into the tree to feed. After two or three years the larvae hatch out, create a hole and fl y away. Meanwhile the insect has eaten its way through the whole tree, leaving it looking like holey cheese. Longhorned beetles often stay in the same tree, feeding off it and laying their eggs in it in turn. Eventually the infested tree gives up the ghost.’

Copini organized his own long-horned beetle- infested forest – without the aid of a single beetle, however. He simulated the exit holes by drilling holes in the tree at various different times during the growing season. He closely monitored the tree’s response to these wounds and compared them in Wageningen UR’s Dendrolab. The location of the wound in the tree ring is particularly important in this.

Difficult cases
The results show that the dating is less precise than expected. ‘There are three times of year when we can date the formation of an exit hole: before, straight after and during the growing season,’ explains Copini. ‘Precision to the month is not possible because of the wide variation in tree ring growth between different trees. That means you cannot identify exactly which growth phase a part of a tree ring is in. For that you would have to have a separate growth curve for every tree.’

But the dating is still perfectly usable, according to Copini. Over the past few years the NVWA has regularly asked him for his verdict on wood affl icted by long-horned beetles. ‘But it has gone quiet recently, which shows that the measures which have been taken are working. The government’s plant protect service can do this test itself now. We only get the diffi cult cases. In this country the situation is under control but in Italy and the US longhorned beetles are damaging forests on a large scale.’

UNDER WATER Does an oak remember a flood? In other words, is there such a thing as a flood tree ring and if so, how do you recognize it in the tree ring archive? Under controlled conditions Copini flooded 200 four-year-old oaks on a trial plot at the Sinderhoeve field station in Renkum. He varied both the period of flooding (from two to six weeks) and the timing in the growing season. The results are striking. ‘Trees do not grow under water and therefore do not form tree rings,’ says Copini. ‘But right after the flooding a ring forms which has exceptionally small vessels. They are half the size of the usual vessels at most.’ Copini sees the typical pattern as incontrovertible evidence that there has been flooding at the start of a growing season. But it does not reveal how long that flooding went on.‘The flooding could have been going on for months in the winter before it was recorded in the wood in the spring.’ A winter flood that is over before spring is not ‘remembered’ at all. Colleagues of Copini’s in Germany can build on this knowledge. ‘They have series of tree rings from oaks going back to 8000 years before Christ. They are using them to make flood records now.’ 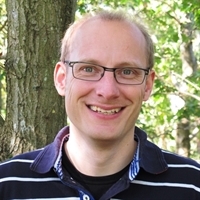 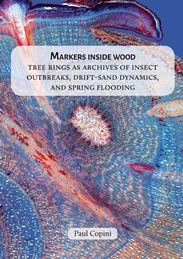