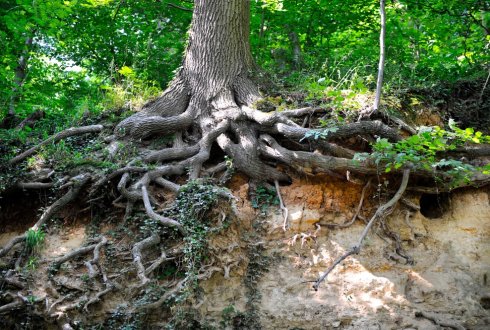 In and around the tangled roots of the forest floor, fungi and bacteria grow with trees. They collaborate on exchanging nutrients for carbon. A new effort to map the most abundant of these symbiotic relationships, involving more than 1.1 million forest sites and 28,000 tree species, has revealed which climate, soil, and decomposition factors determine where different types of symbionts will flourish. This study, published in the scientific journal Nature, helps scientists to understand how symbiotic partnerships structure the world’s forests and how they could be affected by a warming climate.

A team of over 200 scientists from Stanford University and Wageningen University & Research amongst others, worked together on mapping the symbiotic relationships between fungi, bacteria and trees. Hidden in the soil to most observers, these inter-kingdom collaborations are highly diverse. The researchers focused on mapping three of the most common types of symbioses: arbuscular mycorrhizal fungi, ectomycorrhizal fungi and nitrogen-fixing bacteria. Each of these types encompasses thousands of species of fungi or bacteria that form unique partnerships with different tree species. “This study reveals how different groups of trees work together with fungi and bacteria and how these delicate relationships differ from each other,” explains Gert-Jan Nabuurs, professor European Forests at Wageningen University & Research and one of the authors of the study.

The team revealed a new biological rule which they named Read’s Rule, after Sir David Read, pioneer in symbiosis research. Thirty years ago, Read drew maps by hand of where he thought different symbiotic fungi might reside, based on the nutrients they provide. Ectomycorrhizal fungi feed trees nitrogen directly from organic matter, like decaying leaves. So, he proposed, they would be more successful in cooler places where decomposition is slow and leaf litter is abundant. In contrast, he thought arbuscular mycorrhizal fungi would dominate in the tropics, where tree growth is limited by phosphorous. Research by others has added that n-fixer bacteria seem to grow poorly in low temperatures.

Proof of this thirty-year old theory required gathering data from large numbers of trees in diverse parts of the globe. Data that became available with the Global Forest Biodiversity Initiative (GFBI). “The value of a global forest database has clearly been proven now,” says Gert-Jan Nabuurs. “We fed the location of 31 million trees from that database along with information about what symbiotic fungi or bacteria most often associates with those species, into a learning algorithm. This algorithm determined how different variables, such as climate, soil chemistry, vegetation and topography, seem to influence the prevalence of each symbiosis. We found that nitrogen-fixing bacteria are probably limited by temperature and soil pH, whereas the two types of fungal symbioses are heavily influenced by variables that affect decomposition rates, such as temperature and moisture.”

The group used their map to predict how symbioses might change by 2070, if carbon emissions continue unabated. This scenario resulted in a ten percent reduction in the biomass of tree species that associate with a type of fungi found primarily in cooler regions. The researchers cautioned that such a loss could lead to more carbon in the atmosphere, because these fungi tend to increase the amount of carbon stored in soil. “There's only so many different symbiotic types and we're showing that they obey clear rules,” said Brian Steidinger, postdoctoral researcher at Stanford University and lead author of the study. “Our models predict massive changes to the symbiotic state of the world’s forests.”

The data behind this map represents real trees from more than 70 countries and collaboration between hundreds of researchers. Authors from Wageningen University & Research are Mart-Jan Schelhaas, Geerten Hengeveld, Lourens Poorter, Frans Bongers, Martin Herold and Mathieu DeCuyper. The maps from this study will be made freely available, in hopes of helping other scientists include tree symbionts in their work. In the future, the researchers intend to expand their work beyond forests and to continue trying to understand how climate change effects ecosystems.

Maps from this study