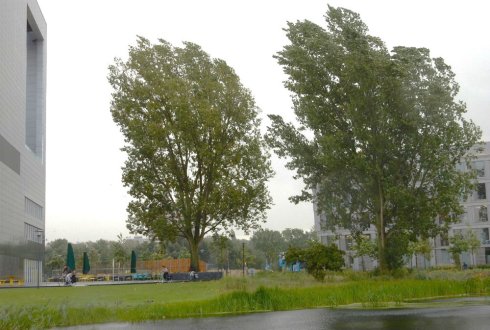 The popular twitter poplar (more than 4000 followers) almost finished its growing season! It has grown more than 2 cm in diameter and makes good chances to be the fastest grower among the other twittering trees in Europa. More remarkable - the growth was realised in a relatively short period between the middle of May and end of July which characterises our poplar as a sprinter!

The growing conditions of the poplar are generally good at the Campus of Wageningen University, where water tables are generally high, making that ample water for transpiration is available. Although we learned that the tree responded positively to rainfall after longer dry periods in the middle of June and July. Interestingly radial growth of the poplar already ceased at the end of July, when growing conditions were potentially favourable and the leaves where still actively transpiring water (active sapflow) and hence producing sugars via photosynthesis. However these sugars are obviously not invested into stem-wood production. Where do these sugars go? We assume that the tree is building up reserves to have a good start in 2018.

The tree will stop twittering soon as by now leaves are already yellowing and are massively shed during the storm of last week which means that sapflow will stop soon. The winter stop will give us time to take a closer look at the data. And we hope to start 2018 with some improvement in the equipment and the possibility to create more original instead of the standard tweets that we send out now.

The diameter growth of the poplar during the growing season of 2017. Two periods are highlighted with the daily cyclus of growth (orange) and of sapflow (blue) shown in detail. Sap flow occurs during the day and growth mostly at night. In both periods, growth changes abruptly in response to rainfall (arrow) after a multi-day period of drought (Source: Jonas von der Crone).

This article also appeared (in Dutch) on Nature Today.