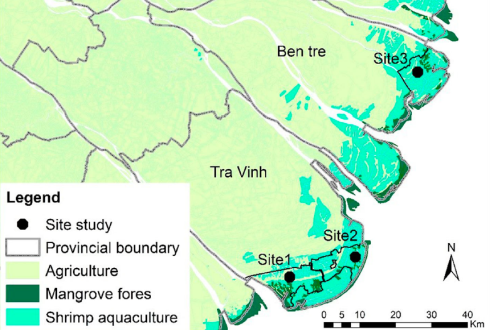 Abstract
Purpose: Mekong Delta's shrimp farming contributes to socio-economic development but tends to reduce the mangrove area. On the one hand, NGOs advocate balancing ecology and economy, while on the other hand, the Vietnamese government supports intensifying shrimp production. The latter strategy increases shrimp diseases and marginalises smallholders. To influence the opinions, knowledge and behaviour of shrimp farmers, we developed and tested a serious board game.

Approach: Through several iterations, we designed a realistic board game mimicking local shrimp farming. Then, after conducting three sessions of gameplay with farmers in three sites, we assessed how this gameplay influenced players. We used a semi-experimental set-up by collecting data on the day of the gameplay, and on two further time-points.

Findings: After the gameplays, farmers reported to have learned about the risks of monoculture-intensive-shrimp system and the advantages of hybrid systems. Likert ratings showed that players adopted innovations faster and, in case of shrimp diseases, consulted commercial service-providers less, but with other farmers more. They confirmed to have learned that the best strategy for them would be to adopt hybrid systems, i.e. intensify part of the area of mixed-mangrove or improved-extensive shrimp farms.

Creation: The findings that board games are effective in the context of a top-down extension systems offer value opportunities.