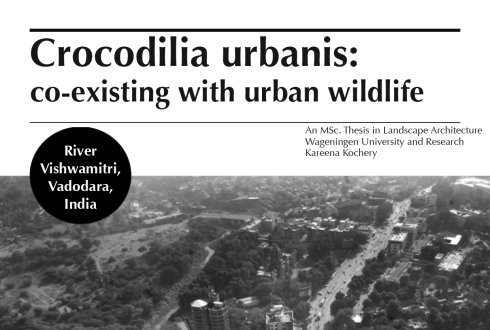 Link to the online report in the library

Animals have inhabited urban areas since the dawn of human settlements (Soulsbury and White,2015,). Urban areas are created by the urbanization of Nature (Barua and Sinha,2017) and in species rich countries like India, this entails the urbanization of wild animals. In some Indian cities, wildlife ranges from perceivably less threatening fauna to the presence of predator species. Vadodara, Gujarat India, is a city with a longstanding relation between hu-mans and reptiles. The river Vishwamitri passes through the city and this 25 km urban stretch of the river is home to over 250 Mugger crocodiles. The case of the river Vishwamitri presents a unique situation where crocodiles cohabit a city and are contained through the agency of the urban river landscape. However, the pressure of rapid urbanization is a looming threat to the continued cohabitation of humans and crocodiles in the city. New conflicts with human land-use arise and the pressure on urban wildlife habitat continuously increases. This research in landscape architecture reframes human-wildlife conflict to include effects of urbanization on crocodile habitat and explores how landscape design can enable human-crocodile interactions, in culturally and ecologically sensitive ways. Relevant perspectives from animal geography and applied ecology have been married in a framework for landscape architecture can design for the kinship and agency of animals in the formation of the urban (Wolch,2002). First, research for design (RfD) and includes field visits, data collection, analysis and synthesis. This was followed by research through designing (RtD), resulting in design guidelines for the city, that were tested on three sites. Site-specific design solutions being the final outcome. Ultimately, the thesis tries to answer “erstwhile calls for animating urban theory” (Barua and Sinha,2017:15) by showing ways forward for cohabitation.