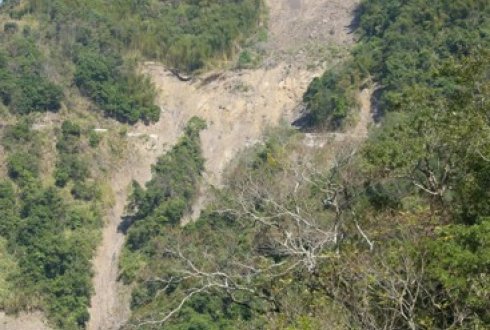 Important controls on evolution of landscapes are the spatial and temporal distribution of shallow landslides. Taiwan is one of the world’s most landslide-hazardous regions. High tectonic activity combined with a subtropical typhoon-climate trigger rapid mass-wasting.

Objective of this research is to predict potential locations of rainfall induced landslides in a sub-watershed in the Shihmen Reservoir Watershed, northern Taiwan, and to study the influence of landslides on landscape evolution with LAPSUS-LS. Subsequently, with a model harmonized to the local system the influence of road construction on landslide potential is investigated.

Given its limitations and assumptions the model shows to be able to deal with topographic heterogeneity and on- and off-site effects of natural or artificial changes in hillslope morphology. Promising results are obtained when comparing site stability with predicted relative failure potential. Insight is obtained into the influence of road construction on slope stability and thus landslide risk. However, limitations that arise from data uncertainty, data handling in a GIS environment and simplifications inherent to landscape modeling affect results and cause dissimilarities between prediction and reality.

In 2008 a new project will start in collaboration with National Taiwan University and Kainan University.