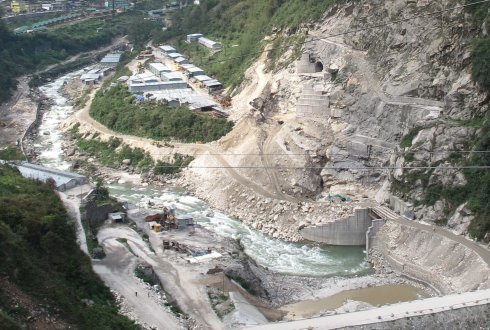 Deepa Joshi, Margreet Zwarteveen and Janwillem Liebrand from the Water Resources Management group won a NWO/WOTRO grant for their research proposal, ‘Hydropower development in the context of climate change: exploring conflicts and fostering cooperation across scales and boundaries in the Eastern Himalayas’. Funding for this project (500,000 British Pounds) is provided by the CoCooN programme, a knowledge, research and innovation programme on Conflict and Cooperation over Natural Resources in Developing Countries. CoCooN aims to contribute to social change by supporting local initiatives from the South to partner with international scientists and non-scientists, and look for opportunities and new approaches for conflict resolution in natural resources management.

The four-year (2014-2017) project builds on an earlier individual award to Deepa Joshi to develop new research in the region (2011, NWO-Indian Council for Social Science Research) on the topic of environmental justice in the Eastern Himalayas.

“The inspiration for the project are the conflicts provoked by the speedy implementation of a large number of mega hydropower projects, partly promoted because of their potential to generate ‘clean energy’ in the climate-vulnerable Eastern Himalayas,” Deepa Joshi says. “These conflicts revolve around the expected benefits and impacts of these projects, and about how these will be distributed. They involve solidarities and struggles of different actors in the region – local communities, civil society groups, public and private investors, and energy and water agencies and professionals – at different scales. To date, trajectories of hydropower development in the region are importantly shaped by how these conflicts play out, which itself is a function of different histories of environmental governance. Hence, hydropower developments is markedly different on the Indian side of the Eastern Himalayas as compared to what is going on in Nepal. By contrasting and comparing these experiences, the project aims to generate lessons about more sustainable, climate-resilient and equitable modes of developing hydropower.”

Using a comparative and transdisciplinary approach, the study led by Deepa Joshi will investigate how different types and arrangements of hydropower development re-configure the water and energy landscapes at multiple scales in Nepal and India. “We are going to map how the mega-water projects distribute climate-related water risks and benefits at different scales; assess their hydrological and technical viability against climate change projections, as well as their implications for livelihood opportunities and risks across groups. In the ethnically diverse Eastern Himalayas, we are particularly interested in assessing how the local fabric of ethnic and socio-political fractures relates to conflicts and solidarities in regard to hydropower development.”

The applied research focus on this project will be carried out with a diverse group of international and local partners, including International Rivers in the United States, the University of East Anglia in the U.K., Boğaziçi University in Istanbul, the University of California, Santa Cruz, the Nepal Water Conservation Foundation, the Nepal Engineering College, the International Water Management Institute in Nepal, Sikkim University, North Bengal University, the Forum for Policy Dialogue on Water Conflicts in India, Aaranyak, end the Advanced Centre for Water Resources Development and Management (ACWADAM) in India.  The project team will explore new and strengthen established networks with committed researchers, scholars, journalists, activists and policymakers at local, national and international levels. These collaborations will be used to strengthen local policy research capacities, enable local climate change literacy among local communities in the region, and facilitate cross-boundary learning among relevant actors and agencies in the region.

Deepa Joshi: “This was a two-tiered, fairly competitive process. Success in winning the proposal would not have been possible without the encouraging support particularly from Linden Vincent, Petra Hellegers, Bert Bruins and Maria Pierce, and of course, our colleagues at the ESG Tender Support Unit. We look forward to some exciting research in the Eastern Himalayas and hope to connect to others working on similar issues in the ESG.”