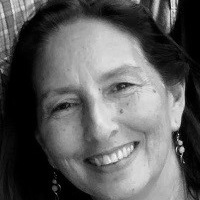 Recent work suggests that episodes of drought and heat can bring forests across climate zones to a threshold for massive tree mortality. As complex systems approach a threshold for collapse they tend to exhibit a loss of resilience, as reflected in declining recovery rates from perturbations. Trees may be no exception, as at the verge of drought-induced death, trees are found to be weakened in multiple ways, affecting their ability to recover from stress. Here we use worldwide time series of satellite images to show that temporal autocorrelation, an indicator of slow recovery rates, rises steeply as mean annual precipitation declines to levels known to be critical for tropical forests. This implies independent support for the idea that such forests may have a tipping point for collapse at drying conditions. Moreover, the demonstration that reduced rates of recovery (slowing down) may be detected from satellite data suggests a novel way to monitor resilience of tropical forests, as well as other ecosystems known to be vulnerable to collapse.
Twitter Whatsapp Linkedin Email
Menu